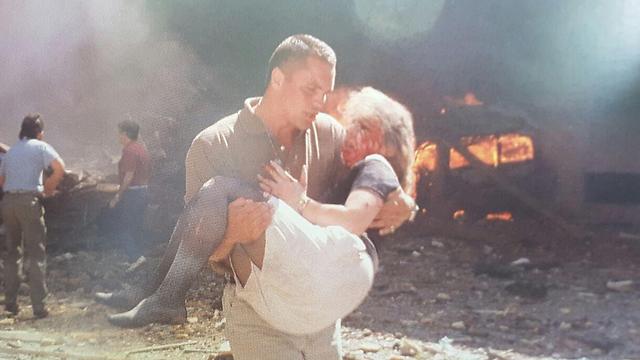 Op-ed: Not a single Israeli minister attended the ceremony marking the 25th anniversary of the Israeli Embassy bombing in Buenos Aires, which left 29 people dead. Has the Netanyahu government given up on settling the score with the perpetrators and finally bringing justice to the victims?

Why isn’t Israel helping the investigation into the 1992 terror attack on the Israeli Embassy in Buenos Aires, which claimed the lives of 29 people?

A special ceremony, which was held last month to mark the 25th anniversary of the attack, was attended by survivors from Israel, diplomats who lost family members in the attack and even people from the United States who had helped the wounded.

The terrorists have not been caught to this very day. The Israeli government, as usual, chose to stay away from the ceremony for its own odd reasons. Out of the 28 members of Prime Minister Benjamin Netanyahu’s government, not a single minister bothered to attend a ceremony commemorating one of the most serious terror attacks that Israeli diplomacy has ever experienced.

Argentina’s new government, headed by President Mauricio Macri, went out of its way to welcome the terror attack’s survivors and the Israeli delegation led by Foreign Ministry Director-General Yuval Rotem. President Macri took the time to listen to the survivors’ pain. The Chief of Cabinet of Ministers Marcos Peña, one of the strongest figures in the new Argentinean government after the Cristina Fernández de Kirchner era, met with Israeli journalists covering the ceremony and told us about the new Argentina, which seeks to reopen the issue of the two serious terror attacks which have yet to be solved.

He also brought up the investigation into the mysterious death of Alberto Nisman, the Jewish chief investigator of the 1994 car bombing of the Jewish center in Buenos Aires, who was found dead in his apartment just one day before he was due to explain to the National Congress of Argentina his allegations against de Kirchner, who he had accused of covering up the case.

His body was found inside the bathroom in a pool of blood, with his personal gun next to it. Initial estimates pointed to suicide, and at the end of the autopsy, the authorities announced that there were no findings pointing to external involvement.

The second terror attack took place on July 18, 1994, at the Asociación Mutual Israelita Argentina (AMIA). The bombing left 85 people dead and more than 300 wounded. Although the traces clearly led to Iran and Hezbollah as the culprit, not a single person has been charged with the bombing to this very day.

About two years earlier—on March 17, 1992, at 2:50 pm—a car driven by a suicide bomber and loaded with explosives smashed into the Israeli Embassy building on 910 Arroyo Street, which had been located there since 1950. The building was completely destroyed, 29 people were killed and hundreds were wounded, including embassy workers, neighbors and passersby. None of the attack’s executers or masterminds were punished in this case either.

The new Argentinean government, so it seems, is doing everything in its power to solve the mystery of the terror attacks that left a dark stain on Argentina’s already gloomy image. The attack on the Israeli Embassy will likely be remembered as one of the biggest failures of the Israeli Mossad, which has the reputation of an invisible octopus with far-reaching tentacles. The Argentinean authorities failed miserably for two-and-a-half decades in bringing to justice the perpetrators of the country’s two deadliest terror attacks.

Has Israel given up on settling the score with the perpetrators of these two serious attacks, which were carried out just two years apart?

That may be the case, in light of the recent conduct of the Netanyahu government, which didn’t bother sending a single minister to mark the 25th anniversary of the Israeli Embassy bombing. It left the attack’s survivors to deal with their mental and physical pain on their own and to keep asking themselves why isn’t Israel doing everything in its power to pressure the Argentinean government to bring the attack’s perpetrators to justice.

Time has not healed the wounds of the families who lost their loved ones and of the dozens of Israelis who were wounded on Argentinean soil, in an attack which has yet to be solved.

Now, the new government in Buenos Aires is willing to make supreme efforts to solve the mysteries. Peña told the Israeli journalists that in the coming months it would become clear whether investigator Nisman was murdered or committed suicide, and the two terror attacks are also back on the new government’s agenda.

But will the Netanyahu government seize this huge opportunity to bring justice to the victims?