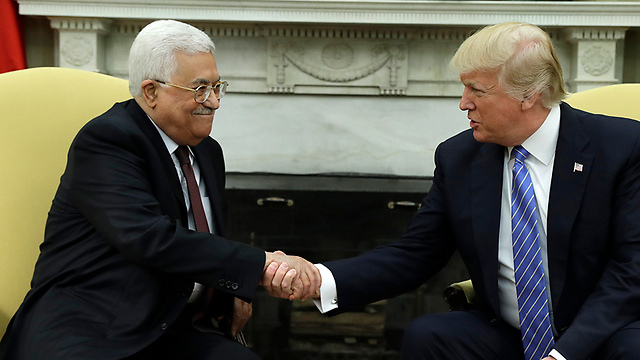 Op-ed: Abbas reiterated in his meeting with Trump that the refugee problem could be solved based on international law and previous agreements. All previous initiatives, however, failed because of one barrier—the Palestinian refusal to compromise on the refugee issue.

There is a concern, just a concern, that US President Donald Trump’s peace plans will be shattered just like any other peace initiative in the past few decades, due to one barrier: The refugee return fantasy.

Occasionally, we hear statements that provide small glimmers of hope. Palestinian President Mahmoud Abbas reiterated last week that the refugee problem could be solved “based on international law and previous agreements.” But that’s the thing: All previous initiatives failed because of a Palestinian refusal to compromise on the refugees. Even when Abbas does make a moderate statement, only several hours go by before a tough clarification arrives.

Will a new American president manage to change the regular pattern? It won’t happen through another negotiation. That would be a waste of time. It could only happen the opposite way. First of all, after an agreement that will be presented by Trump, all the relevant parties must accept it, otherwise there will be no reason to move forward. The outlines are already known; they were presented by Clinton, in former prime minister Ehud Olmert’s initiative and in the draft submitted to Abbas by former US president Barack Obama and secretary of State John Kerry. It wasn’t easy to swallow the previous suggestions, which the Palestinians had already refused. It definitely won’t be easy this time. Prime Minister Benjamin Netanyahu won’t be grabbing this opportunity, either. The only thing that has changed is that there is a new broom with a lot of determination. Will the determination manage to create real change? We’ll have to wait and see.

Two days before Abbas met with Trump, Hamas presented a new policy program, which—even according to the organization's spokesmen—does not go against its old anti-Semitic charter. It includes no recognition of Israel and has principles that, at first glance, seem to contradict one another. On the one hand, Hamas is willing to settle for a Palestinian state within the 1967 lines and a return of the refugees to their communities of origin. On the other hand, “Hamas rejects any alternative to a full and complete liberation of Palestine, from the river to the sea.” In actuality, however, there is no contradiction, since founding a Palestinian state within the 1967 lines while allowing Palestinian refugees to return to Israel is in itself equivalent to “a full and complete liberation, from the sea to the Jordan River.” So these are identical, rather than contradicting, clauses.

Hamas is a PR master, because it doesn’t matter what it really says. It managed to get positive headlines. CNN reported of “a new policy” and Sky News announced that Hamas was softening its policy on Israel. The new document is so soft, that it asserts that “the Zionist project is the main reason for all of the Arab and Muslim nation’s troubles, and it threatens world peace and security.” They are not saying Jews, they are saying Zionists, and they are blaming them for all troubles. New anti-Semitism in addition to the old one.

A thorough analysis of the new document raises concerns that some of its authors were members of the “forces of progress” from the West. There are entire paragraphs that seem to have been lifted from the mouths of anti-Zionist professors in leading universities.

“Hamas’s stance on the Jewish problem, anti-Semitism and the persecution of Jews,” the document states, “is that this is a phenomenon that is fundamentally connected to European history rather than to the history and heritage of the Arab and Muslim world. The Zionist movement, which occupied Palestine with the help of Western forces, is the most dangerous pattern of a colonialist settlement, which has already disappeared from most of the world and must disappear ifrom Palestine.”

In the California university of Berkeley, the spearhead of “the forces of progress,” there is an academic course that openly declares that its goal is to look into ways for a “decolonialization of Palestine.” Hamas didn’t have to work hard. It just copy-pasted.