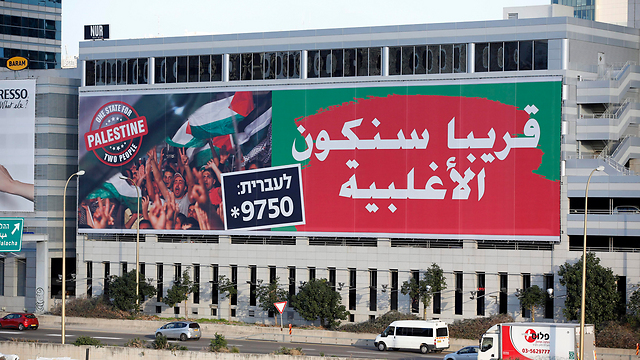 How Arabic became a foreign language in Israel

Op-ed: The Nationality Bill, which downgrades Arabic from an official language, completes the process of excluding Arabic from the public domain and turning it into a weapon used to sow panic among the public; Arabic is becoming a foreign language, a refugee in Israel.

Sabah al-khair. Wake up and smell the black coffee. There is nothing new under the sun in one of the most problematic clauses of the Nationality Bill. I am referring to the clause which allegedly downgrades Arabic from an official language in Israel to a language with “a special status.”  And I say allegedly, because this is just the highlight of a process—which has been taking place for at least two decades—of excluding the Arabic language from the public domain.

Up until 20 years ago, signs in the Arabic language in Israel’s mixed cities were not a rare sight: The Arabic alphabet was present in signposts and in neighborhood stores. Not every Israeli knew how to speak Arabic, but the public domain allowed it to exist.

And today? The Arabic language is disappearing from street signs, the Education Ministry decided some time ago that there is no obligation to teach Arabic as part of the curriculum, and even the automatic answering services—which courteously offer help in English and in Russian—will fall silent if you ask them for help in Arabic.

This is not a marginal issue. This is exactly how a language is concealed from the public landscape and turned into a foreign language. The less present Arabic is, the more it is perceived as threatening.

Campaign urging separation from Palestinians. The less present Arabic is, the more it is perceived as threatening (Photo: EPA)

One of the most striking expressions of this process was a political campaign affiliated with the ‘center,” which included huge billboards across the country showing protestors carrying flags of Palestine. The caption, in Arabic, read: “Soon we will be the majority.” For those who didn’t understand the message—the majority of Israeli citizens who can’t read Arabic—the ad included a phone number for explanations.

And so, the process of turning Arabic from a language which is partially assimilated into the Israeli everyday life into a language which hardly exists in the public domain—and, eventually, into a weapon used by copywriters to sow panic among the public—has been completed.

Arabic has undergone a process of backward evolution in Israel and is today a sign of primitivity, the signpost which terrifies the person who spots it while riding the bus, the monster under the common Israeli citizen’s bed. So instead of giving it a “special status,” the law should spare the citizens the euphemism and refer to Arabic as “a foreign language.” That is, in fact, what is happening to it. Arabic is becoming a foreign language, a refugee in Israel.

The next in line are those who speak the Arabic language. Our process, which will also end with a new law condemning us as foreigners in our country, is just beginning.