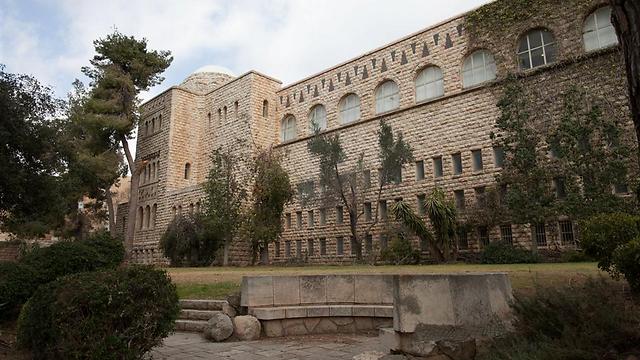 Op-ed: It is right and proper that the Israeli national anthem be sung at graduations from the Hebrew University of Jerusalem; however, the panicked reaction to its possible exclusion doesn’t gel with the undeniable success story of the Zionist venture and the regional power that the State of Israel has become.

Let me start with the bottom line: In the past, I studied at the Hebrew University in Jerusalem, and I currently teach there, and in my opinion, it is appropriate that at its graduation ceremonies, "Hatikvah" be sung.

I also think that the tendency of many of the Arab students—in universities across Israel—to remain seated while the national anthem is sung at official ceremonies is disrespectful.

No one in his right mind would insist that somebody who isn't Jewish enthusiastically sing with enthusiasm "a Jewish soul yearns." There is a limit. But as for standing up: that's appropriate. That's my opinion, anyway. It's a matter of basic human dignity.

Hebrew University of Jerusalem (Photo: Ohad Zwigenberg)
In any event, the Faculty of Humanities' graduation, with or without "Hatikvah," will take place soon. The ceremony will take place at the Hebrew University's amphitheater on Mount Scopus, opposite a breathtaking view of the Judean Desert, the Dead Sea Valley and the Moab Mountains. A long time ago, two ceremonies were held at that very same place, and it is about those events that I want to write here.

The first ceremony took place 99 years ago, on July 24, 1918. That same day, in the presence of Gen. Allenby, Chaim Weizmann, Rabbi Avraham Yitzhak Hacohen Kook, the Jerusalem Mufti Kamil al-Husayni and many others, the cornerstones were laid for the establishment of the Hebrew University of Jerusalem.

At the end of the ceremony, the audience sang the British anthem, as well as "Hatikvah." The Mufti was the older and more moderate half-brother of the infamous Haj Amin al-Husseini, who took the post after his death. As far as I know, Kamil al-Husayni, who laid one of the cornerstones of the Hebrew University "in the name of Jerusalem," did not protest or leave during the singing of what was then the anthem of the Zionist movement. Like I said, he was a moderate man.

As long as in the heart, within,

And onward, towards the ends of the east,

An eye still gazes toward Zion;

Our hope is not yet lost,

The hope of two thousand years,

To be a free people in our land,

The land of Zion and Jerusalem.

Forty-nine years passed. There were developments and wars. A state arose. Another war took place. Fifty years ago, immediately after the Six-Day War, in June 1967, IDF Chief of Staff Yitzhak Rabin stood in the same amphitheater on Mount Scopus.

He spoke at a ceremony in which he received, on behalf of the army, an honorary doctorate from the Hebrew University of Jerusalem. His speech there remains in my opinion one of the most beautiful documents written here in the Land of Israel in the past hundred years.

Rabin said in that speech: "The warriors in the front lines witnessed not only the glory of victory but also its price—their comrades who fell beside them, bleeding. And I know that the terrible price paid by our enemies also touched the hearts of many of our men deeply. It may be that the Jewish people never learned, never accustomed themselves to experience the thrill of conquest and victory, and so we receive it with mixed feelings."

Yitzhak Rabin (R) with Moshe Dayan in the Six-Day War (Photo courtesy of the Ministry of Defense)
Since then, 50 years have passed. It seems to me that over the years, most of the people living in Zion have actually become very accustomed to "the thrill of conquest and victory." But one thing has not changed, in my opinion, since the days of anxiety before the Six-Day War to today: We remain with a profound existential, exilic, almost terrified insecurity. And it causes many of us, encouraged by our quick politicians, to behave and feel like a persecuted minority, not like a regional power. Because with all due respect to the new Nationality Bill, in my opinion, the damage that the State of Israel may suffer from not singing "Hatikvah" at the graduation ceremony of the Faculty of Humanities at the Hebrew University is such that we can handle it, even without the fiery declarations filled with courage and national pride by many politicians.

Don't get me wrong. If you ask me if it's appropriate to sing "Hatikvah" at the university's graduation, then I think that it is. But the fact that the prime minister, the education minister, the leader of the Bayit Yehudi faction Shuli Mualem-Rafaeli, the justice minister, and many others are all tweeting and posting declarations that they are shocked that it might not be sung—is pathetic. It's really pathetic.

And that, in my opinion, indicates a deep fear. In 1995, the psychologist Erel Shalit published a small book called " The Hero and His Shadow: Psychopolitical Aspects of Myth and Reality in Israel." In it, he analyzes our existential fears, those that lie beneath the image of the indomitable Israeli hero.

Every time I hear Israeli politicians talking about Israeli Arabs as a dangerous, ungrateful fifth column and not as a group of citizens that is a national minority that is largely law-abiding and could be a bridge to peace, I get a little ashamed. It seems to me that after so many years, so many victories, and so many successes, we could begin to relax here in the Land of Israel.

We needn't be complacent or ignore existential threats, but we could understand that a Jewish state in the Land of Israel is an existing fact that isn't going anywhere. And it doesn't depend on singing the anthem, the university or anything else. Calm down, my dear politicians. Breathe deeply, and relax.

This isn't popular, but it needs be said: With all due respect to the army, the last time the IDF was called upon to fight opponents whose capabilities were close to its own was in 1973. For more than 40 years now, Israel has only been fighting enemies who have no chance of defeating it, and it is afraid of them and hates them as if they were the devil himself.

Because with all due respect to Hezbollah missiles, to the slaughterers of ISIS, to Hamas knifemen and to the northern branch of the Islamic Movement, it has been many years now that Israel has had no serious enemy endangering its existence. There was a chance that the Iranians would become such an enemy, but it faded, or at least was postponed for several years.

This happened because Israel created the impression in the world that it would do everything possible to prevent Iran from becoming a significant enemy, and for that feat the current prime minister deserves credit.

So why are these things not self-evident? Because of the tremendous power of fear and hatred and the ease with which they can be aroused in the public. I think that after a hundred years of Zionist success, we can begin to be a free people in our country—a people that is also free from fear.

Professor Yoram Yovell is a psychiatrist, brain researcher and psychoanalyst who teaches at the Hebrew University's School of Medicine and at Hadassah Ein-Karem Hospital in Jerusalem. He can be reached at Office@yovell.co.il.