In what is dubbed as counterweight to Obama's 2009 Cairo speech, Trump will address leaders of 50 Muslim-majority countries in Saudi Arabia and expected to urge them to 'drive out the terrorists from your places of worship'; speech's draft does not include reference to 'radical Islamic terrorism' or to democracy and human rights.

Even as his administration fights for its travel ban from several Muslim-majority countries, US President Donald Trump is using the nation that is home to Islam's holiest site as a backdrop to call for Muslim unity in the fight against terrorism.

Trump's Sunday speech, the centerpiece of his two-day visit to Saudi Arabia, will address the leaders of 50 Muslim-majority countries to cast the challenge of extremism as a "battle between good and evil" and urge Arab leaders to "drive out the terrorists from your places of worship," according to a draft of the speech obtained by The Associated Press.

Trump, whose campaign was frequently punctuated by bouts of anti-Islamic rhetoric, is poised to soften some of his language about Islam. Though during the campaign he repeatedly stressed the need to say the words "radical Islamic terrorism"—and criticized his opponent, Hillary Clinton, for not doing so—that phrase is not included in the draft. 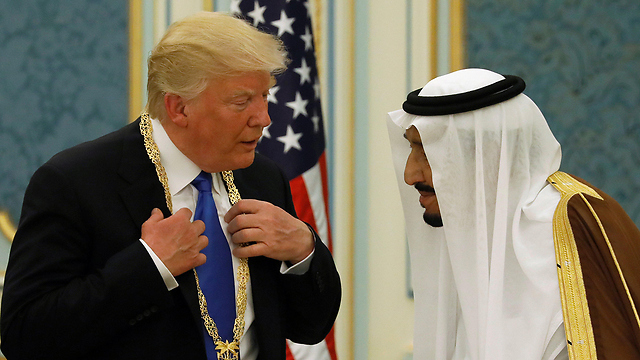 King Salman awards Trump the Collar of Abdulaziz al Saud (Photo: Reuters)
The speech comes amid a renewed courtship of the United States' Arab allies as Trump is set to have individual meetings with leaders of several nations, including Egypt and Qatar, before then participating in a roundtable with the Gulf Cooperation Council and joining Saudi King Salman in opening Riyadh's new anti-terrorism center. The address also notably refrains from mentioning democracy and human rights—topics Arab leaders often view as US moralizing—in favor of the more limited goals of peace and stability. "We are not here to lecture—to tell other peoples how to live, what to do or who to be. We are here instead to offer partnership in building a better future for us all," according to the copy of his speech. Two different sources provided the AP with copies of the draft of his remarks, billed as a marquee speech of the trip. The White House confirmed the draft was authentic, but cautioned the president had not yet signed off on the final product and that changes could be made. Trump may seem an unlikely messenger to deliver an olive branch to the Muslim world. 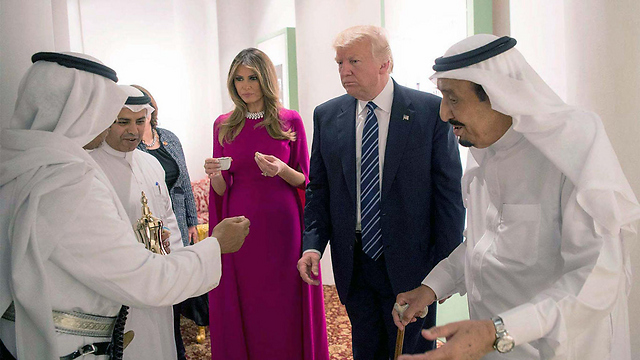 Trump greeted by King Salman upon his arrival in Saudi (Photo: EPA)
During his campaign, he mused, "I think Islam hates us." And only a week after taking office, he signed an executive order to ban immigrants from seven countries—Iraq, Iran, Syria, Sudan, Libya, Somalia, and Yemen—from entering the United States, a decision that sparked widespread protests at the nation's airports and demonstrations outside the White House. That ban was blocked by the courts. A second order, which dropped Iraq from the list, is tied up in federal court and the federal government is appealing.

White House officials have said they consider Trump's visit, and his keynote address, a counterweight to President Barack Obama's debut speech to the Muslim world in 2009 in Cairo. 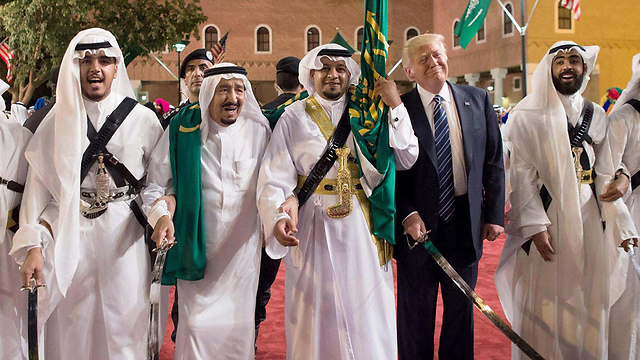 Trump greeted by King Salman upon his arrival in Saudi (Photo: EPA)
Obama called for understanding and acknowledged some of America's missteps in the region. That speech was denounced by many Republicans and criticized by a number of the United States' Middle East allies as being a sort of apology. Saudi Arabia's leaders soured on Obama, and King Salman did not greet him at the airport during his final visit to the kingdom. But on Saturday, the 81-year-old king, aided by a cane, walked along the red carpet to meet Trump as a fleet of military jets swept through the sky, leaving a red, white and blue trail in their wake. During a ceremony at the grand Saudi Royal Court, the king awarded Trump the Collar of Abdulaziz al Saud, the theocracy's highest civilian honor.

Trump bent down so the king could place the gold medal around his neck. Saudi Arabia has previously bestowed the honor on Russian President Vladimir Putin, British Prime Minister Theresa May and Obama. 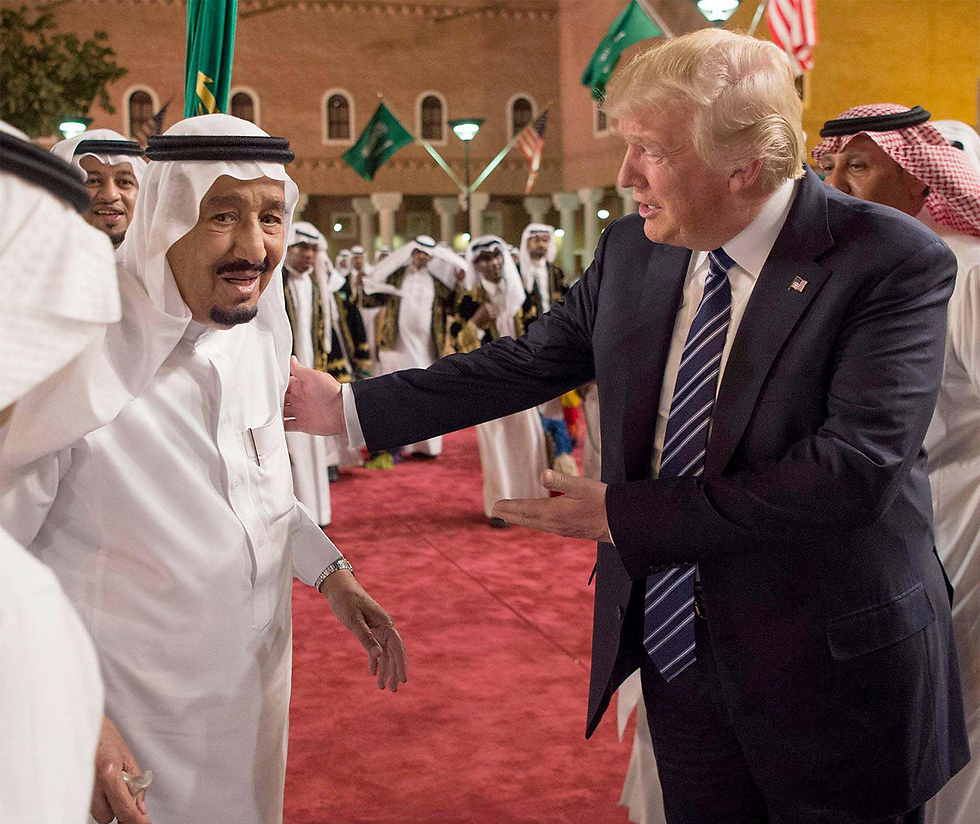 Trump greeted by King Salman upon his arrival in Saudi (Photo: EPA)
The president's stop in Saudi Arabia's dusty desert capital kicked off his first foreign trip as president, an ambitious, five-stop swing that will take him through the Middle East and into Europe. He's the only American president to make Saudi Arabia—or any Muslim-majority nation—his first overseas visit. Trump arrived in Riyadh besieged by the fallout from his controversial decision to fire FBI Director James Comey and more revelations about the federal investigations into his campaign's possible ties to Russia. But escaping Washington for the gold-plated embrace of the Saudi royal family—a decor not so unlike Trump's own Manhattan home—appeared to give the president a boost. The president was largely kept out of earshot from reporters, rendering them unable to ask about the tumult back home. But he did make a brief utterance to the press pool, deeming the proceedings "a tremendous day." Trump is scheduled to leave Saudi Arabia, home to Mecca, the holiest site in Islam, early Monday to head to Israel.