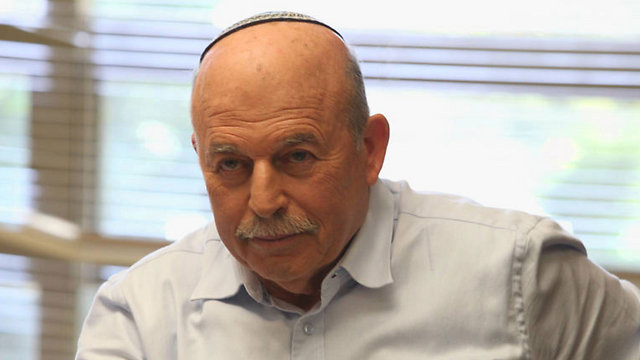 After collecting testimonies from women who say they have been sexually harassed by the Bayit Yehudi MK, police question him under caution for four hours; when the allegations first came to light, Slomiansky claimed he never sexually harassed anyone and postulated his accusers may have misinterpreted his warm and affectionate behavior.

Bayit Yehudi MK Nissan Slomiansky was questioned by police for four hours on Sunday over allegations of sexual harassment. After collecting testimonies from women who accused the MK of sexually inappropriate behavior, the Israel Police's Lahav 433 investigation unit recommended to the attorney general to summon Slomiansky for questioning under caution. The investigation into Slomiansky began when several posts were made on social media about an MK who sexually harassed several women. These posts were made by friends of the women who were allegedly harassed by Slomiansky.

MK Nissan Slomiansky (Photo: Gil Yohanan)
At first, the MK remained unnamed but after pressure from Bayit Yehudi, Slomiansky was revealed to be the politician in question. When the allegations were first made public, Slomiansky claimed he never sexually harassed anyone and postulated his accusers may have misinterpreted his warm and affectionate behavior. A statement was issued on his behalf claimed, "MK Nissan Slomiansky has never harassed women. After a meeting with several rabbis, he understood that his warm and affectionate behavior, which is the same toward everyone, is sometimes interpreted in a different way, and for that he is sorry. MK Slomiansky has been serving the public for 40 years, including time in the Knesset, and he will continue to do so." The rabbi of Safed, Shmuel Eliyahu, who formed an inquiry team to look into the allegations, said at the time that "even in the absence of police complaints, we still need to say that there is no place for this type of behavior in society. The fact that he apologized means that there was something. If there was nothing, there would be no need for an apology."