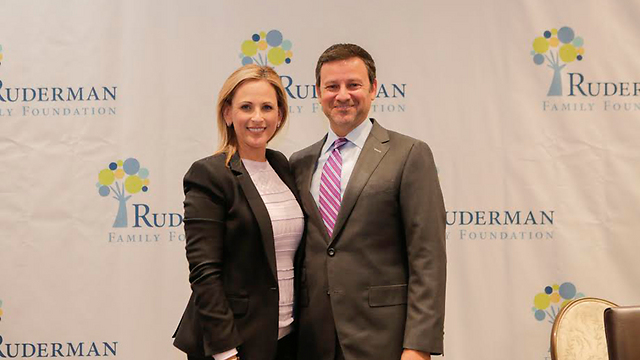 Sign me up: Marlee Matlin to receive Israeli activism award

Marlee Matlin made history by becoming the first and only deaf person to win an Academy Award. This month, the Jewish actress will arrive in Israel to receive a $ 100,000 prize for her work at integrating of people with disabilities into general society.

30 years ago, Marlee Matlin broke ground in Hollywood. She became the first deaf performer, and the only one to date, to win an Oscar for her excellent role in the film Children of a Lesser God. Though decades have gone by, no other deaf actor has managed to repeat her achievement, which is a mark of shame on the American film industry.

Matlin's win remains the stellar, almost unreachable dream for a community she has fought to make heard. On June 19, she will receive the $ 100,000 Morton Ruderman Prize in Israel, awarded annually to a person whose work has promoted the integration of people with disabilities into society. Just before landing in Israel, we interviewed her via email.

Matlin with Ruderman FOundation President Jay Ruderman (Photo: Niv Shank)
Children of a Lesser God was one of Hollywood's most successful films in the 1980s. In it, Matlin played a hard-working woman who attends a prestigious school for the deaf and has a complex affair with her teacher, played by William Hurt. After winning the Oscar, she became one of the hottest names in Hollywood. But even though she nabbed roles in several popular films, such as What the Bleep Do We Know? and TV shows, such as the West Wing and Separated by Birth, her new status did not translate into superstardom.

"There is no doubt that winning the Oscar gave me recognition beyond all I could imagine, but it did not provide me with a job," admits Matlin. "In Hollywood, they still didn't know how and what to do with me, beyond focusing on plot lines that were related to the fact that I can't hear. I played along with it for a while, but now, thirty years later, I've already moved on. These days, I help people see how they can include a deaf person into the storyline without stopping on their being deaf."

You have to make noise

Matlin readily admits that "although there has been an improvement since I won the Oscar, the statistics prove, there is still a long way to go." She notes that while "there are more real-life plots in the characters with disabilities, and sometimes the characters integrate into the story without dealing only with their limitations, but actors without disabilities still embody those characters. In fact, only five percent of the roles of people with disabilities are actually played by them."

What needs to change in order for disabled artists to really succeed in Hollywood?

"There is more to be done about this issue, more interviews in the media, social media, more education, and yet some people will never understand it because they think there is nothing to do, simply because they think in economic terms and the fact that they are the majority and we are the minority. But as I always said, I never wait for them to come to me, but that instead I try to make things happen for myself."

This is Matlin's first trip to Israel, and she does not hide her excitement. "I can't wait to see the views, to taste your food, which I have heard a lot about, but most of all I look forward to meeting deaf Israelis and people with disabilities, as many as I can. To show them that even though I am deaf, I did it all, successfully, so that anyone can do it. It's just like Herzl's quote that Henry Winkler, the producer of Children of a Lesser God, used to quote: 'If you will it, it is no dream.' I plan on saying that a lot during my time with you."

Hoping to make them pride

What do you know about the situation of people with disabilities in Israel?

"I've been told that people with disabilities in Israel have opportunities, but I don't know whether this is due to legislation or public awareness. I look forward to visiting Israel, learning, seeing with my own eyes and sharing."

What significance does winning the (Ruderman—ed) prize have for you?

"It is a great honor." Says Matlin. "I hope I can bring pride to the Ruderman Foundation, both in the United States and in Israel."