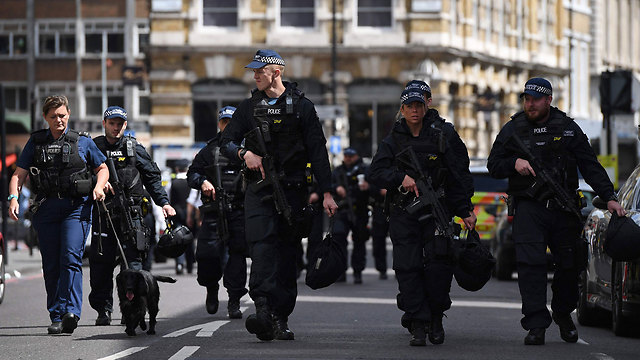 War on terror vs. justification of terror

Op-ed: There are no simple solutions for the cancer of terror, but as long as it has the support of politicians like Jeremy Corbyn, the chance of defeating it is almost nonexistent.

They have one and only thing in common: They are Muslims. And they are not alone. They have an army of people who understand, explain and justify them. And there are many other frustrated young people. There are millions of families in Europe who came from countries that Europe exploited and even abused. There are also thousands of Africans from Congo, in which millions were massacred by Belgium. But they are not looking for revenge and they are not turning to terror. It happens only when it involves Muslims—not all Muslims of course. The absolute majority of Muslims are against terror. But the camp of those who understand and justify the terrorists favors the radicals.

Police forces in London following Saturday night’s attack. Because they are acting efficiently, most planned terror attacks have been uncovered before the execution stage (Photo: AFP)

In Britain, which has been hit by two murderous acts of terror within two weeks, there is a double path. On the one hand, mosques are given full freedom. The result is that 45 percent of the mosques operate under the auspices of the Deobandi school, which is the Indian version of the Saudi-made Wahhabi school, and another 6 percent are affiliated with the Wahhabi school. In other words, 51 percent of the mosques are controlled by the radical, separatist streams, which are in favor of applying the Sharia laws and order women to walk around with full head covering.

And these are the results: A survey conducted a decade ago revealed that 37 percent of young Muslims in Britain prefer to live under Sharia laws, compared to only 17 percent of adults. Similar rates and a similar gap were found in response to the question whether a Muslim who converted to a different religion should be executed.

There has been an attempt to stop the radicalization. Special projects—“Engaged” and “Ricu”—have been introduced in recent years, sparking a fiery public debate. Linguists, psychologists, marketing experts and others have been used as part of these projects to infuse messages against radical Islam, disguising the fact that this is a governmental initiative. If similar programs had been operated in Israel, the radical left and parts of the media would have likely gone wild with descriptions of dangerous brainwashing, serious damage to democracy and so on.

On the other hand, the British security forces have shown some significant success. Precisely because they are acting efficiently, most planned terror attacks have been uncovered before the execution stage. Nevertheless, individual acts of terror have been executed and will be executed, as no country has succeeded in reaching absolute prevention—not even the United States or Israel.

British Prime Minister Theresa May has not hesitated to say that this terror is the result of radical Islam and has announced new steps in the war on terror. Her main rival in Thursday’s elections, however, is Labour leader Jeremy Corbyn, who has the support of the radical left. This is the man who defined Hamas and Hezbollah as his “friends." This is the man who in 2014, during a trip to Tunisia, visited the grave of one of the terrorists who carried out the Munich massacre.

Corbyn is not alone. In Britain, like in the rest of the Western states, there is a major stream which hates the West and provides justifications for terror. There is no need to mention that this stream also hates Israel and sometimes even Jews too. There are more and more manifestations of anti-Semitism in the British Labour. The problem is that many of Britain’s citizens support the Labour candidate. In recent years, we have heard a lot about the rise of the radical and anti-Semitic Right in Europe. It’s true. But we should pay attention to the fact that the radical and sometimes anti-Semitic Left is growing too.

There are no simple solutions for the cancer of terror. But as long as it has the support of the different Corbyns, the chance of defeating it is almost nonexistent.