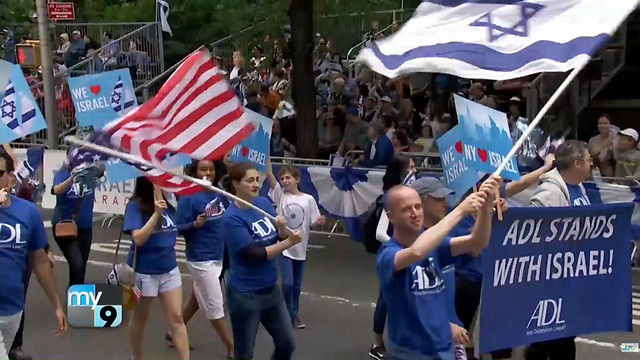 Fifth Avenue in blue and white for Celebrate Israel Parade

Manhattan's Fifth Avenue was decked out in blue and white Sunday, as 40,000 people participated in the annual Celebrate Israel Parade.

During the march, Erdan said, "It is very exciting to see Fifth Avenue painted blue and white, and it is strong evidence of American support for Israel. The march this year marks the 50th anniversary of the unification of our capital, and here in New York people understand very well that Jerusalem is the eternal, united capital of the State of Israel. This year we also launched the 4IL site, which will enable all those who love Israel and march here and around the world to act against the lies that are spread against the State of Israel on the Internet."

Gov. Cuomo declared Shimon Peres Day in honor of Israel's late president, saying, "This is a special day, especially for me. A day named after one of the founding fathers of the State of Israel, an inspirational man and a visionary. We will always remember his strong connection to the United States and New York."

Nehemia Peres, son of Shimon Peres, thanked Gov. Cuomo for the emotional gesture and presented him with an award in honor of Peres.

"My father worked his entire life to strengthen the strategic ties between Israel and the United States. There is no greater friend to Israel than the United States. Today I came here to say thank you on behalf of my father and we continue his legacy with this march," said Peres.