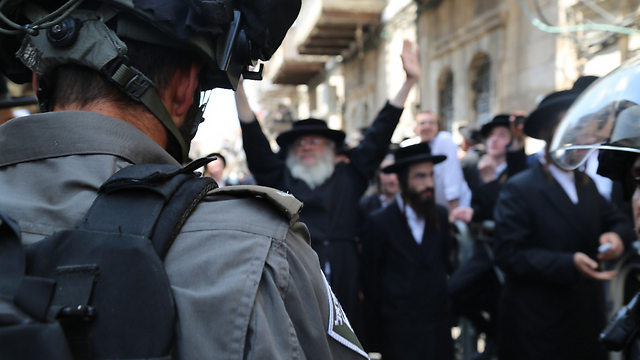 Hooliganism in a shtreimel

Op-ed: Exempting the entire Haredi public from military service is a situation we have been forced to accept, but the attacks on Haredim who do want to serve are intolerable, while the police's hands are tied. Is there any wonder these thugs are now inciting the murder of female soldiers?

A leaflet calling on yeshiva students to kill female soldiers was distributed last Thursday on the streets of Jerusalem’s Mea Shearim neighborhood. “Dear young man or yeshiva student,” read the pashkevil, a kind of leaflet or poster which is very popular in ultra-Orthodox neighborhoods. “If you are forcibly taken to the destruction army, you are permitted to and you should do the following things: Take the rifle you received, kill every female soldier around you and grant her ‘self-sacrifice.’” This is where I must emphasize the author’s meaning: Killing a female soldier is basically granting her a mitzvah.

Moderate members of the Neturei Karta faction in Jerusalem argued in their defense that the credibility of the document was unclear. That’s funny. Since when does a pashkevil—a libelous writing against a certain person or body—have any credibility? (Pashkevilim, you should know, are created in subversive printing houses, distributed secretly and attached to bulletin boards or walls by courageous individuals in the darkness of the night).

So they tried out a different argument: The pashkevil wasn’t referring to women soldiers in particular, but to military people in general, those who forcibly draft yeshiva students to “the destruction army” (a lame marketing trick attempting to create a link between the IDF and tsarist Russia, which kidnapped Jewish children to military training in Siberia and made them convert).

Riots in Mea Shearim, last week. The court scolded the police for raiding the Mea Shearim neighborhood on Friday of all days (Photo: Police spokesperson)
And surely, at the end of the pashkevil, there is another explicit order: “Kill every commander who keeps you forcibly, kill every recruiter and seducer and assistant, kill yourself rather than transgress.” Considering the fact that the recruiters and the “seducers” are Haredi soldiers themselves, this means that if a cheeky yeshiva student joins the destruction army of his own volition, he can and should be killed, so he won’t serve as a bad example for others. And so he won’t harm the brilliant arrangement: We will study and you will die, because someone has to protect us, right? On Friday morning, the day after the pashkevil was published, riots broke out in Mea Shearim after a police force raided the streets in a bid to arrest hooligans who attacked and beat up Haredi soldiers. Once again, in the name of God and the Torah, the thugs went wild and inflamed the neighborhood. Police officers were injured, the violent protestors were detained , and the police were forced to call in massive Yasam (special patrol unit) forces to disperse the rioters and clam everyone down. In the afternoon, however, 14 of the 16 detained were already released, and the court even scolded the police for conducting the operation on Friday of all days, when there is a fear of Shabbat desecration.

The proximity between the two events explains, in a nutshell, the violence Haredim who insist on serving in the army encounter. In the beginning, Israel’s first prime minister allowed a small number of yeshiva students, prodigies, to be exempted from military service so they could dedicate their lives to Torah studies, which is perfectly okay. Over the years, the arrangement was expanded to apply to the entire Haredi public, which is perfectly not okay. Having no other choice, however, we accepted this situation, and the protests died out in the shadow of political deals that turned an immoral situation into a fictitious democracy.

But harming those who want and are willing to serve is already intolerable. It happens all the time, however, despite the Nahal Haredi’s success and the Haredim flocking to the labor market, which requires preliminary military service. In Beit Shemesh and Beitar Illit, in Elad and in Jerusalem, Haredim go out to serve in the army, and the crowds attack them with curses and boycotts, with clubs and low blows—expelling their children from esteemed educational institutions. And when the police try to deal with this, their hands are tied. Is there any wonder the situation has deteriorated to incitement to murder against female soldiers?

There is a clear difference between the desire to do what one’s conscience tells him and the demand to force it on others. Breaking the nose and ribs of a Haredi soldier who excludes himself from the rewarding arrangement of Torah in exchange for blood is not just selfishness, arrogance and a fanatic perception of superiority. It is hooliganism in a shtreimel.