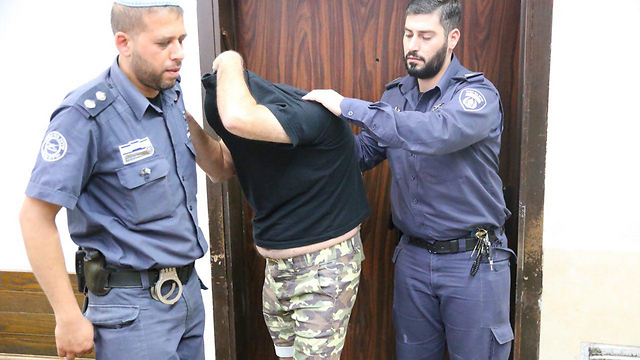 According to complaints from at least six students, the suspect, from Rishon Lezion, had touched several girls during class.

The suspect has denied the charges against him, claiming, "I just hugged the girls."

Only a month ago, he was convicted of indecent acts against another girl he was giving private lessons to. In that instance, the suspect had fondled the girl and attempted to kiss her on several occasions.

So far, four of the girls gave their testimony to police, with investigators believing the release of his identity would lead to more complaints. However, at present, his name and the school he worked at are under gag order.

The suspect's remand was extended by a week Wednesday morning by the Tel Aviv Magistrate's Court.

Police said the girls were unable to determine exactly when the indecent acts began, and noted there were additional lines of inquiry being explored outside the school. The suspect's computer and cellphone have been seized and are being searched, police said.

The suspect had been working as a substitute teacher in the school after obtaining a teaching certificate in January of this year and was arrested after one girl told her mother he had hurt her.

The girl's mother and the school principal approached Ministry of Education officials and police to investigate the matter.

Responding to criticism concerning how the suspect was able to gain employment in the school, police issued a statement saying, "The Israel Police, as a law enforcement body, works only according to the law. Employment permits are given by the Israel Police in accordance with the provisions of the Prevention of Employment of Sex Offenders in Specific Institutions Law, 5761-2001.

"According to the provisions of this law, a person who does not have a conviction for a sexual offense will receive an employment permit, even if they are being investigated at the time. Despite this provision, police continued investigating suspicions against the suspect and any attempt to frame the situation differently is inappropriate and against the law."

MK Yifat Shasha-Biton (Kulanu), who heads the Knesset's Special Committee for the Rights of the Child, vowed to investigate the matter thoroughly and said, "It is inconceivable that while we are trying to act in every way possible to prosecute someone who hurts our children, there is a way for them to return to a children's environment."