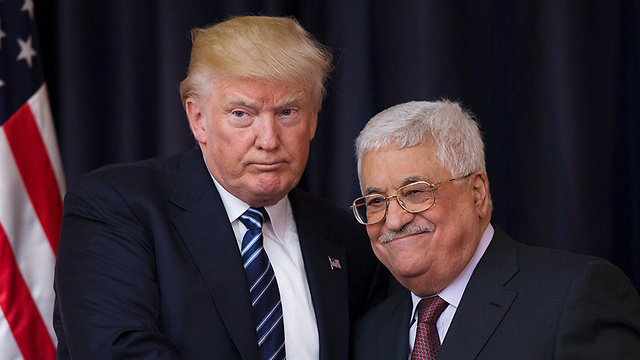 Op-ed: The US president wants the Palestinian leader to adopt Egypt and Jordan’s commitment to a real war on terror. If Abbas agrees, it will be the end of the dream to ‘liberate Palestine through an armed struggle.’ How will he explain that to Palestinian refugees and to the offspring the people he marched with on the paths of terror?

US President Donald Trump’s statement in his meeting with Palestinian President Mahmoud Abbas in Bethlehem, that “peace won’t come where terror is rewarded,” is nothing less than a historical and pivotal statement, as it touches the more exposed nerves of the Israeli-Palestinian conflict. Trump yearns to implement the moderate Arab-Sunni model in the “territories”—like Egypt and Jordan, for example.

The extent of anti-Israeli incitement in the two countries, which have peace agreements with us, is just as high as in the “territories.” The verbal attacks launched by Egyptian President Abdel Fattah al-Sisi and Jordan’s King Abdullah on Israel’s leaders, as a sort of tax they are paying oppositional elements in their countries, are pretty “legitimate” as well in the Middle East. Nevertheless, the Egyptian president and Jordanian king’s commitment to a real war on terror is the model that the United States would like to see in the Palestinian Authority territories as well. Will this happen with Abbas?

The chances for that are not high. People argue that in spite of Trump’s short time in office, he rushed to draw operative conclusions about the Israeli-Palestinian conflict. It seems to me that in light of the current state of affairs across the West Bank and the Gaza Strip, he was uncompelled to study the issue too intensively and thoroughly. Trump immediately realized that even if Abbas wears a suit, talks quietly and moderately and repeats again and again that he is “extending a hand towards peace,” the Palestinian leader is still committed to terror.

Trump is seeking to replace the Palestinian people, but may actually lead to the replacement of Abbas (Photo: EPA)

Abbas, Trump believes, is not mature enough yet for the changes the US is planning in the Middle East, which is why the American president raised the bar very high for Abbas in Bethlehem: He is willing to let the Palestinians keep the spots, as long as they bid farewell to the leopard traits.

What is this about? It’s not just the high monthly salary paid to whoever sheds more Israeli blood, or the monuments and streets commemorating terrorists who murdered Israeli babies in their beds. It’s not just the glorification, which the West has finally began detesting, of “freedom fighters” like terrorist Dalal Mughrabi, who murdered at least 37 Israelis in the bus massacre in March 1978 with her accomplices. It’s not just the kindergartens in the “territories,” which display suicide bombers’ explosive belts on the doll and puzzle shelves. It’s also Abbas himself.

Abbas has a proven terrorist reputation. It has been claimed that he was one of the masterminds of our athletes’ murder in the 1972 Munich Olympics and stood by Yasser Arafat and Abu Jihad in the most difficult junctions of terror. Western leaders are eager to grant terrorists a sort of rehabilitation. Nevertheless, until today, not a single American leader has demanded that the Palestinians change, but really change. Neither Barack Obama nor Bill Clinton, and not even the George Bushes, held a gun to any Palestinian leader’s head and demanded that he take a step which almost means political suicide. Abbas is required to give up the splendid idea which every Palestinian has been educated on since the day he was born—the liberation of all of Palestine through an armed struggle and the Palestinians' return to Palestine.

Abbas is supposed to ignore the refugees in the camps, who are dreaming of returning to the occupied homeland. He is supposed to turn his back on the second and third generations of the people who marched with him on the paths of terror for years. In fact, Trump had demanded that Abbas betray the path and doctrine of Mufti Amin al-Husseini and Sheikh al-Qassam, and disconnect from the ideological basis that Fatah and the PLO were founded on. The meaning, without a doubt, is loss of control for the rais over the street, over the organization and over the Palestinian people.

Trump, therefore, is seeking to replace the Palestinian people… He may actually, however, lead to the replacement of Abbas.

Dr. Col. (res.) Moshe Elad is a lecturer at the Western Galilee College and has served in the past in senior positions in the territories.