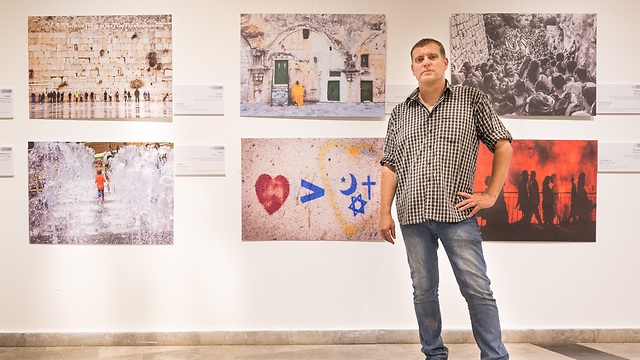 Alon Wald initiates a photography exhibit spotlighting Jerusalem to mark 50 years since its reunification just meters away from where his own father was killed in the Six-Day War.

When Alon Wald, the marketing manager of Jerusalem's Ammunition Hill National Memorial, decided to initiate a photography exhibit spotlighting the capital to mark 50 years to its reunification in the Six-Day War, there was a special personal resonance—his own father was killed just meters away from his office in one of the fiercest battles of that war.

Photographers from 84 different countries—from Japan to Iraq—recently sent in some 14,500 photographs of Israel's capital to compete in The International Photography Challenge—JerusaLENS. Selected photos are now on display in a unique Jubilee Exhibition at Ammunition Hill National Memorial Site in Jerusalem running from June 6 to August 6. "For this challenge, photographers were asked to capture their personal Jerusalem," Wald told Tazpit Press Service (TPS). "I initiated this contest because Jerusalem is important to the whole world. and I wanted people to be able to express their love of this city through their own personal lens."

Alon Wald at the JerusaLENS—The Jubilee Exhibition International Photography Challenge at Ammunition Hill (Photo:Aharon Krohn/TPS)
Photographers from all over the world were invited to upload photographs of Jerusalem from any time and on any subject to a special online gaming platform for photographers, known as GuroShots. Within a month and half, some 14,500 photographs were uploaded and received 2.4 million votes, a record number of votes and photos, surpassing previous GuroShots challenges featuring cities such as Paris, New York and London. "We were looking for old and new photos of the Jerusalem," Wald. "People reacted amazingly. We had people from countries that don't have relations with Israel sending in their photos of Jerusalem." The four-month long challenge attracted photographers from Arab countries including Iraq, Tunisia, Algeria, Egypt, Jordan, and Morocco. "The overwhelming response to the photography challenge far exceeded our expectations," said Wald, who noted that the challenge amassed the largest collection of Jerusalem photographs on the web. "There are photos of holy Jerusalem, secular Jerusalem, Jerusalem of different faiths and cultures—it was inspiring to see the beauty that others find in our capital," said Wald. About 50% of the photos sent captured religious activity in Jerusalem including that of the Jewish, Christian and Muslim faiths, while 30% related to the Temple Mount. The Chords Bridge was one of the most photographed modern symbols of the city in the competition. Curators of the photography challenge included Rina Castelnuovo, an Israeli photographer for the New York Times, Ziv Koren, an Israeli photojournalist, Gali Tibbon, a Jerusalem based award-winning photographer, Avi Ohayon, the head of the photography department at the Israeli Government Press Office, and the late David Rubinger, the Time-Life photographer for Israel for many years. It was Rubinger's last photography project before he died in March, and the challenge was dedicated to his memory.

Photo:Aharon Krohn/TPS
Of the 400 leading photographs, the curators chose 100 photographs that were enlarged and printed by HP Israel, which are now being showcased in an exhibition on Ammunition Hill in partnership with KKL-JNF along with JNF USA; Ammunition Hill; the Ministry of Foreign Affairs; the Ministry of Tourism, Jerusalem and Heritage; and the GPO and with the support of HP (Scitex and Indigo) and Venture Partners PICO. David Mor won the $5,000 prize for the Challenge Photographer for his photo of a bagel merchant pushing a large cart of bread in the Old City, while Dalia Rajwan won $2,225 in a photography prize chosen by the audience, of an ultra-Orthodox man walking in the Old City. Ariel Lebanon won $2,225 in the Guru category for his photo of teenagers sitting on top of the Old City walls. For Wald, the photography challenge took root because of his own unique connection to Jerusalem and specifically, Ammunition Hill. "My office is literally a few feet from where my father died during the battle of Ammunition Hill during the Six-Day War," Wald said. Wald's father, Capt. Rami Wald, was a paratrooper who was killed during the grueling battle for the reunification of Jerusalem at Ammunition Hill, a heavily fortified Jordanian military post whose capture was crucial to open up the way to the Old City. On the morning of June 6, 150 Israeli paratroopers attacked the hill, fighting against a similar sized Jordanian force as well as fortified bunkers and trenches. By the end of the battle, 37 paratroopers were killed including Wald's father and 90 were wounded; 71 Jordanian soldiers lost their lives in the fighting.

Wald was only 11 months old when his father died. "I tried to get to know my father through his friends. My father and his friends gave us a united Jerusalem with their blood and sweat and opened the path to this city in 1967. Today, I believe that it is our mission to share Jerusalem with the world through creative ways that go beyond politics and division."