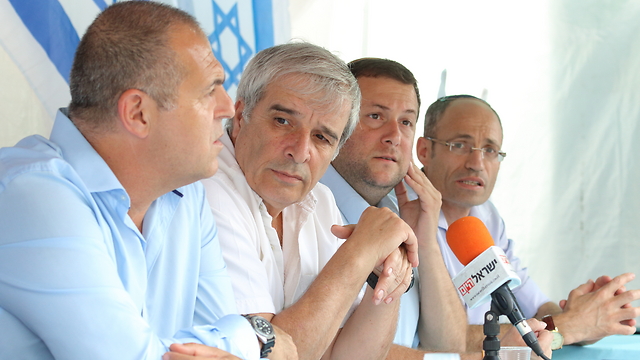 Between a rock and a hard place in the West Bank

Analysis: Settler leaders are frustrated with the prime minister, and they recently unleashed six month of pent-up anger; they say they were promised unlimited building under Trump and that Netanyahu isn't meeting his assurances.

If the looks on the faces of West Bank mayors, regional council heads and residents of the settlements didn't tell enough of a story of frustration when they left their meeting with Prime Minister Benjamin Netanyahu Wednesday, it only took until Thursday morning for settlement leaders to unleash six months of pent-up anger at the prime minister.

Speaking to reporters following the meeting, Ma'aleh Adumim Mayor Benny Kashriel, Avi Roeh, head of the Mateh Binyamin Regional Council, Gush Etzion Regional Council Head Shlomo Ne'eman and Samaria Regional Council head Yossi Dagan took pains to stress their "very solid support" for the prime minister as well as Netanyahu's insistence that "there is 'no issue' of settlement blocs." Efrat Mayor Revivi added praise for both Netanyahu and Trump, saying the new US administration has led to concrete achievements on the ground over the past five months.

"(During the Obama administration there was a) deep freeze in building and a declared policy of 'not one more brick.'

Yesha Council Press Conference announcing the cancellation of the protest tent outside the Prime Minister's Residence in Jerusalem. From left to right: Avi Naim, Beit Aryeh Municipal Council Head, Avi Roeh, Chairman of the Yesha Council and Binyamin Regional Council, Yossi Dagan, Head of the Shomron Regional Council, Davidi Perl, Head of the Gush Etzion Regional Council (Photo: Hillel Maeir/TPS)
"In contrast, we heard yesterday from the prime minister that there are no building limits and an understanding about where building will take place: all over Judea and Samaria, where there are existing settlements, and the building is going to happen in proximity to existing settlements. From there outwards, we will expand as demand is met, both close (to settlement blocs) and further out," Revivi told Tazpit Press Service (TPS). In reality, however, the meeting was a far cry from the leaders' demand for nearly unlimited building in all areas of the West Bank. Revivi issued a tepid statement following the meeting reminding the prime minister that Israelis in the West Bank "had shown patience" for a de facto building freeze during the Obama administration, but one could almost feel the pleading, almost prayerful tone in the statement that "there is no question that the change of administration in the United States has given the government more room to work, (but) we hope to see results on the ground." By Thursday, however, some leaders had dropped their figurative gloves. Samaria Regional Council head Yossi Dagan told Army Radio that it is "no secret" that the settlers are very disappointed with the fact that Netanyahu has not reversed building policy in the West Bank, especially after all the prime minister's talk about "after Obama." "The prime minister promised us a rush of building after Obama left office, but he hasn't kept his promises," Dagan fumed. "We will no longer accept a situation in which a half-million Jews in Judea and Samaria, alongside 400,000 Jews and Israeli citizens in Jerusalem are treated as fourth-class citizens."

The West Bank settlement of Ma'ale Adumim (Photo: AFP)
Dagan went on to threaten a large-scale public campaign against the prime minister, but in reality the pro-settlement community finds itself today at a difficult crossroads. In political terms, the right wing has no plausible candidate to support for prime minister other than Netanyahu. True, the settlement movement has built a strong bloc of representation inside the Likud party, with powerful MKs such as Minister of Jerusalem Affairs and Minister of Environment Ze'ev Elkin, Deputy Foreign Minister Tzipi Hotovely, Tourism Minister Yariv Levin and UN ambassador (and former MK) Danny Danon. But none of those legislators appear poised to challenge Netanyahu for the party leadership anytime soon, if at all, and there is no indication that the 67-year-old prime minister is planning to step down before the next election, currently scheduled to be held no later than November 2019. Inside the Likud party, Netanyahu is deeply unpopular—members of the party's central committee have told this reporter repeatedly that Netanyahu acts like a "dictator" who will not hesitate to implement the policies he sees fit to oversee, regardless of party votes or decisions. Around the government table, Kulanu member (and Housing and Construction Minister) Yoav Galant made headlines earlier this week with a demand to build 67,000 new homes in the western Samaria foothills, a short drive from Tel Aviv. Taken in the context of the settlers' frustration with the prime minister, the statement appeared to be an early pre-election trial balloon to West Bank voters, but the comment received little coverage in settlement communities. Bayit Yehudi leader Naftali Bennett is unlikely to expand his support beyond the national religious population.

It would appear, then, that the settlement community finds itself today between a rock—a Trump administration that does not support widespread building in the West Bank—and a hardplace—an Israeli prime minister whose primary policy focus is to block Iran from obtaining nuclear weapons.