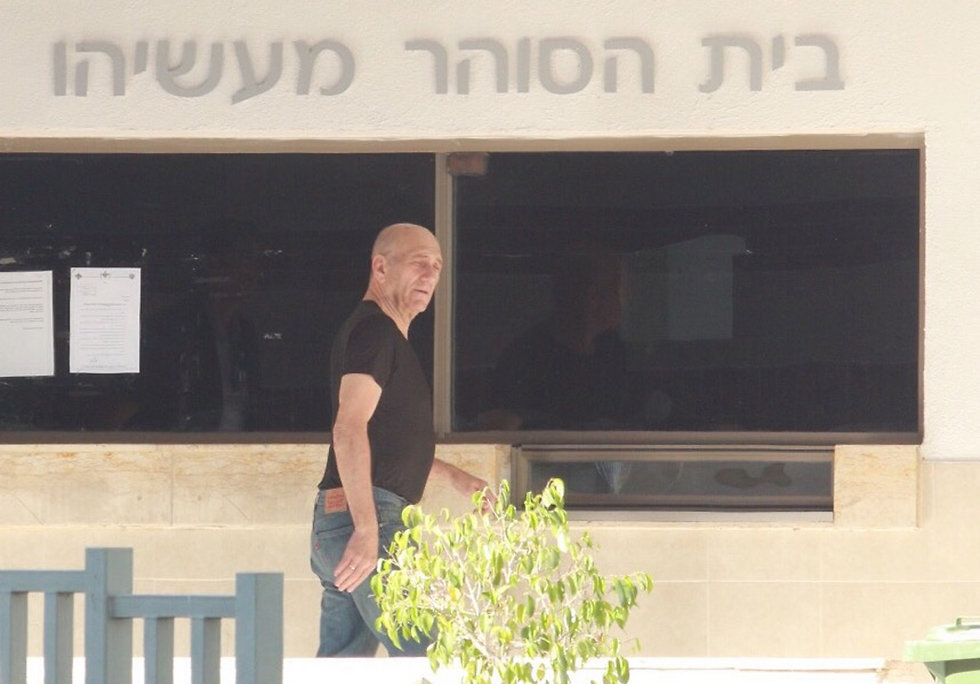 After classified documents were found in the possession of former prime minister Ehud Olmert, who is currently serving a prison term on charges of corruption, police raids the Yedioth Books offices and another home in search of more of the documents.

The Israel Prison Service seized documents suspected of being classified from Olmert's prison cell and from his lawyer last month.

Police is investigating whether the documents in question, which did not receive approval from the Director of Security of the Defense Establishment, were related to the book Olmert is writing in prison, where he is serving time after having been convicted of corruption.

Olmert back to prison after furlough (Photo: Dana Kopel)

After the documents were found in his cell, Olmert was denied furloughs as well as visits from his lawyers.

The Parole Board is scheduled to discuss Olmert's request for early release on Sunday. The State Attorney's Office, which recently said it would oppose the request to shorten Olmert's sentence, requested on Thursday to postpone the discussion because of the investigation into classified documents found in his cell, but the request was denied.

A statement from the Justice Ministry on Thursday afternoon elaborated on the suspicions against Olmert, saying that during his incarceration, the former prime minister wrote a book, "parts of which deal with sensitive security matters."

Last month, Olmert's lawyer was stopped on his way out of the prison after visiting his client, with a chapter from the book found in his possession.

Olmert is suspected of sending the chapter to different unauthorized people outside of prison "in violation of the Penal Code and the warnings he has been given before."

"Failing to completely safeguard these secrets, in violation with the law and the guidelines determined by authorized defense officials, raises concern the information leaked, which could have caused severe damage to state security," the statement went on to say.

"As part of examination, testimonies were collected from different people and different documents were seized. This morning, the police searched, among other places, the offices of Yedioth Ahronoth's books punisher (but not the newspaper's offices)... at a later stage, in light of the examination's findings, a decision will be made whether to turn it into a full criminal investigation."

After the discovery of the documents last month, Olmert's lawyers said in response, "During his prison sentence, Olmert wrote an autobiographical book about his life and his work on social, economic and security issues. This book was submitted in its entirety to the Military Censor over two months ago and no one, especially Mr. Olmert, has any intention of publishing it without their approval. Beyond the book, no classified information was leaked, transferred or published by Mr. Olmert."