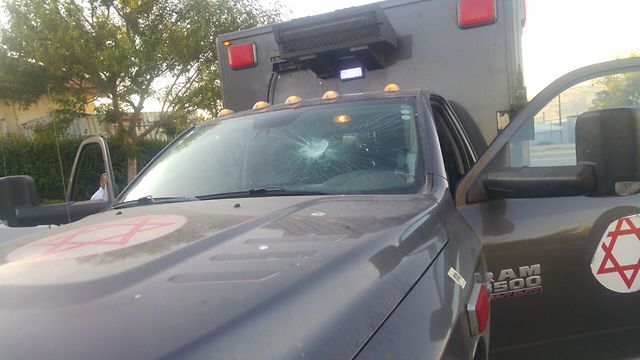 IDF patrol vehicle blocked at the entrance of Yitzhar settlement after extremists lay spikes Saturday, while later on, IDF ambulance is pelted with stones by the activists after treating a dehydrated resident; military slams the 'grave' incidents.

An IDF ambulance came under attack on Saturday night when a group of Jewish activists began throwing rocks at it after arriving to treat a resident of the Yitzhar settlement suffering from dehydration. No one was injured in the attack, but minor damage was caused to the vehicle.

The incident was the second serious attempt of the day to hinder the IDF’s operational duties in at the settlement south of Nablus. Earlier in the day, spikes were placed at the entrance to Yitzhar’s premises in order to prevent security forces from entering.

Commenting on the incidents, the IDF said that the hostile activities signified a crossing of a red line. “We emphasize that harm of any kind of harm to the security forces preventing them from fulfilling their duties and protecting the residents of the area is grave,” an IDF statement said. “We will continue to act to enforce the law and order in Judea and Samaria.”

In the first incident, an army patrol vehicle arrived at the entrance of Yitzhar when the drivers noticed that spikes ad been placed on the road, forcing them to turn back. In the evening, around an hour before the conclusion of Shabbat, a military ambulance was called to the settlement and after paramedics finished treating a resident, the vehicle, which was not armored, was pelted with rocks and stones hurled by a group Jewish youths who managed to strike the front windshield.

The IDF has recently identified an increase in such incidents by extremist Jewish activists against the security forces.

In April, Jewish settlers attacked IDF and Border Police forces with stones after security forces arrived in Huwara to quell a confrontation between Jews and Arabs in the area.