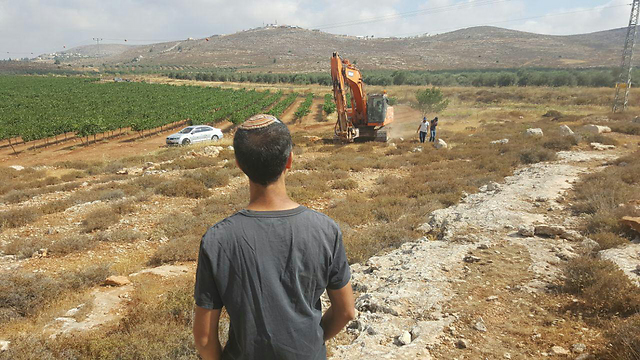 Despite months of delays and months promises, work finally begins on a new community for Amona evacuees; previous attempts to begin construction delayed by procedural matters in court injunctions; PM: ‘There has never been nor will there be a better government for the settlement movement than our government.’

Preliminary work has begun on the new community of "Amichai," the name of the new settlement in which the government promised it would resettle Amona evacuees.

The new community is located in the Geulat Zion area of the Shilo Valley—a site chosen by the residents themselves as part of their agreement with the government—and is on state land. Amichai is currently planning more than 100 housing units.

In the months since their forced evacuation from Amona, residents have endured difficult conditions, including living in a field school in the nearby settlement of Ofra.

From Ofra, residents who were evacuated in February and activists attempted to pressure the government into establishing the new community as promised, and even demanded an injunction to begin work on a nearby hill, which legal officials in the government and IDF rejected.

At this stage, it is not yet clear how long the foundation work will take nor when residents will be able to live in the new community.

"We welcome the beginning of work and we pray for it to continue uninterrupted," said Avichai Buaron, a representative of the Amona evacuees, to Ynet. "The entire public expects the prime minister not to allow any elements—whether they are leftist activists, legal officials or IDF—to stop the work. This success—the establishment of a new community in Judea and Samaria—cannot become a failure and a farce. The public is already disappointed. Responsibility rests with the government and its leader."

Prime Minister Benjamin Netanyahu issued a statement Tuesday, saying, "Work has begun, as I promised, on a new community for Amona evacuees. After decades, I have the privilege to be the first prime minister to build a new community in Judea and Samaria. There has never been nor will there be a better government for the settlement movement than our government."