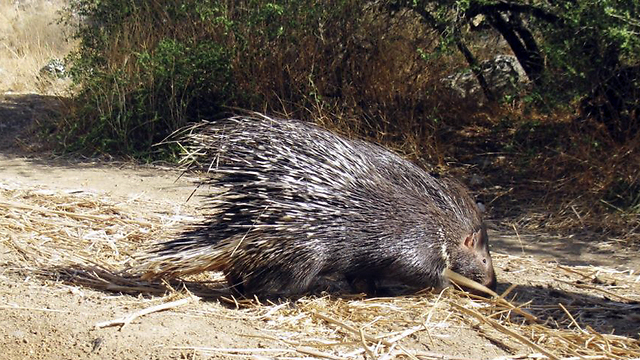 Israelis are asked to report roadkill on the navigation app since December; Waze compiles the data with an environmental society and are able to take measures to reduce the number wild animals killed on roads.

Each year, a staggering number of wild animals are run over on Israel's roads including gazelles, hyenas, turtles, badgers, porcupines, and otters. In order to reduce the numbers, The Society for the Protection of Nature in Israel (SPNI) partnered up with Israel's Waze, the world's largest community based traffic and navigation app, to encourage drivers to report roadkill incidents.

Since the campaign began in December 2016, SPNI has been able to compile data from more than 12,000 user-generated reports. The information has led to the development of a map detailing which Israeli roadways are most dangerous to wild animals. "What this means is that within six months, over 12,000 animals have been killed crossing the road, which includes wildlife and domesticated animals," Shmulik Yedvab, Director of SPNI's Mammals Center told Tazpit Press Service (TPS). "And of course that number doesn't include every single roadkill incident."

Porcupines presumably welcomed the efforts. (PhotoÇ Meital Aharon/Nature and Parks Authority)
"We are currently studying the data from several areas where unusually high levels of roadkill have been observed, and we are examining roads that cross authorized ecological corridors, such as Route number 70/75, east of the Carmel Mountain," said Yedvab. Yedvab explained that the causes for the high numbers of roadkill vary, and the recent campaign has helped highlight specific hotspots where the numbers are particularly high. "In one area in the north, for example, we discovered that gazelles were often hit as they would eat vegetation that grew on the side of one particular roadway. The solution for that particular situation is to remove the vegetation," he said. "The information streaming in from Waze users is an invaluable resource throughout this process and it illustrates the severity of the problem of wildlife run-overs." The highest number of roadkill incidents was reported on Route 2, the coastal highway from Tel Aviv to Haifa, and Route 6, the trans-Israel highway, where more than 700 sightings were reported on each road. Other highways with high numbers included Route 1, the main Jerusalem-Tel Aviv artery, with 600 roadkill incidents and Route 443, the alternate highway from Tel Aviv to Jerusalem with 500 roadkill incidents. "We call on the public to increase its cooperation with this project and provide SPNI with the additional data required to assist us in formulating the optimal action plan towards reducing roadkill and saving Israel's wildlife," emphasized Yedvab. One positive outcome from this initiative is that many drivers using Waze to report the roadkill incidents informed SPNI that they had become much more alert and careful on the roads. Israeli Waze users can report dead animals on the side road by clicking the circular orange report icon within the Waze app, after which users select the yellow triangular "Hazard" symbol, followed by "On road" and "Roadkill" icon which features a porcupine and hazard sign. Over the last several years, the increasing awareness regarding the difficulty and risks roads pose to wild animals led planners to build special passages for animals when constructing new roads or expanding and upgrading old roads, but solutions for many of the roads now deemed to be Israel's most dangerous for wildlife have yet to be determined. It is for this reason that SPNI's campaign with Waze continues to be invaluable for wildlife conservation. The accumulated data collected by SPNI from the past six months was presented for the first time this week on June 20, at a session of the Knesset Science Committee. Initiated by SPNI, the session focused on the subject of using technological tools and methods to assist nature preservation activities and safeguard the environment and Israeli nature.

"As far as we know, Israel is the only country in the world to make use of a navigation app to help in the protection of wildlife," pointed out Yedvab. "By utilizing Waze, we have also gotten the public not only aware but also involved in wildlife conservation efforts."