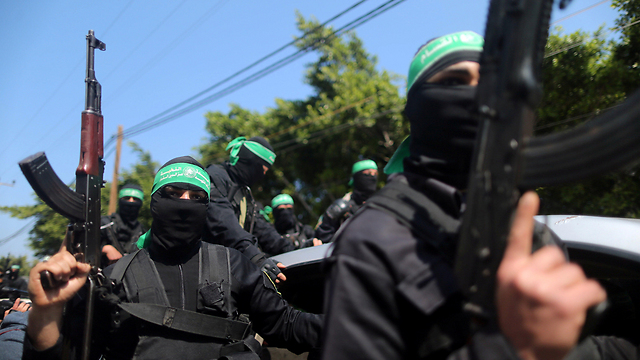 A window of opportunity in Gaza

Op-ed: Changing the situation in the strip in a joint regional and Israeli effort can serve as a litmus test for the widely debated extent of ‘pragmatism’ Sunni Arab countries have vis-a-vis Israel.

With Hamas marking its 10th year in power recently, tensions are again running high in the Gaza Strip. This is due to the severe humanitarian crisis there and Hamas’ current isolation in the Arab world. First Qatar, Hamas’ main patron in the Arab World, declared its dissociation from the Gaza Strip and left Hamas behind without political and financial support. Then, in Ramallah, an emboldened Mahmoud Abbas embarked upon a new round in his political fight against Hamas and decided, in his latest move, to reduce payments for electricity supply to the Gaza Strip.

Ultimately, Israel implemented Abbas’ decision and thereby jeopardized its own security interests—namely keeping the humanitarian situation in Gaza in check and easing the tension with Hamas. But after a decade of Hamas rule and three rounds of violence, Israel’s policy towards the Gaza Strip has ended up in a deadlock again. “Abbas is trying to drag Hamas into a war with Israel,” Defense Minister Avigdor Lieberman stated in the recent Herzliya Conference. But identifying the electricity crisis as an “internal Palestinian dispute” left Jerusalem, in Lieberman’s eyes, with no choice but to follow Abbas’ decision and to put heavy pressure on Hamas in the Gaza Strip.

Israel can find common ground with Egypt and other Sunni states in stabilizing Gaza, weakening Hamas and relieving it from the burden of responsibility over the coastal strip (Photo: Reuters)

Amounted pressure on Hamas has in the past indeed led to confrontations with Israel. It relieved the organization from internal mismanagement and united the population again in a joint fight of resistance. But in the current isolation of Hamas lies an opportunity—a chance to change the picture in Gaza together with regional and international actors. It is in their own interest to become involved, once they understand the possible outcomes of Hamas being under pressure this time: With no patron in the Arab world, Hamas has already reached out to Iran for political and financial support. Only recently have Hamas officials met representatives of Iran's Islamic Revolutionary Guard Corps (IRGC) in Lebanon and debated reconciliation; shortly, Ismail Haniyeh is set to visit Tehran and deepen the relationship.

Besides the possibility of increased Iranian influence in the south of Israel, the second scenario is related to yet another war between Israel and Hamas. Defense Minister Lieberman has repeatedly declared, that in any future war the IDF will “completely destroy” Hamas’ rule in Gaza. Such an outcome will most likely lead to the empowerment of radical Jihadi elements in the Gaza strip (Islamic Jihad, ISIS), rather than the return of the long absent Palestinian Authority—if such an illusion still exists.

It is clear that both scenarios—a Hamas supported by Iran and the empowerment of radical Islamic movements in Gaza—should not only concern Jerusalem, but also Egypt and other “pragmatic” Sunni states in the region. And it is here, where Israel can find common ground in stabilizing Gaza, weakening Hamas and relieving it from the burden of responsibility over the coastal strip. With a new US administration that is determined in its fight against terrorism and has declared its hard stance on Iran, such an approach would also find Washington’s support.

In order to use this window of opportunity for a regional approach with international support, the process must rely on three principals: First, selected regional (e.g. the Gulf Cooperation Council, Egypt) and international actors (e.g. the United Nations, the European Union) will engage in designated projects in the Gaza Strip, aimed at relieving the humanitarian suffering and promoting development in housing, agriculture and education. Israel would pre-approve these projects beforehand and monitor their development in process.

Second, for this purpose Israel will ease its blockade on Gaza for the delivery of agreed-upon materials into the Strip. Since the regional and international organizations are not interested in strengthening Hamas, they will guarantee that the purpose of the end use is met. The mechanism would, additionally, allow Israel to remain in its current control position of the Gaza borders; consequently, regional and international aid should enter Gaza through Israel (Ashdod, Kerem Shalom) and, possibly at a later stage, through a Gaza port.

Third, Israel will, of course, retain its freedom of action against targets that may threaten its national security (such as border-crossing tunnels, weapon factories, etc.).

In general, such a process would aim at widening the disagreements between Hamas’ military wing and the movement’s political leadership, helping the population on the ground and pushing the organization to a path of modernization. In concrete, this policy has three valuable benefits: First, money and investment create dependencies (carrots) that Hamas would carefully contemplate before losing them in just another war. Additionally, Hamas will be less prepared to risk Israeli retaliation in a situation where brethren Arabs from neighboring states as well as Western institutions are heavily engaged in reconstruction. And ultimately, such an international engagement in Gaza would relieve Israel of some of its responsibilities there, while giving it the upper-hand in security matters.

Changing the situation in Gaza in a joint regional and Israeli effort can serve as a litmus test for the widely debated approximation of “pragmatic” Sunni Arab countries to Israel, especially amid reports that Israel and Saudi Arabia are considering the opening of an overt economic cooperation.

It is in Israel's interest to use the current window of opportunity as a deliberate decision for its own national security. And Israel should take the chance now—before the next war breaks out, before the regional landscape changes and before inter-Arab power games condemn Israel to stand on the sidelines again.

Hannes Pichler is a guest research associate and Ofek Ish Maas a research assistant at the Institute for National Security Studies (INSS) in Tel Aviv. This op-ed represents the authors' own personal opinion.