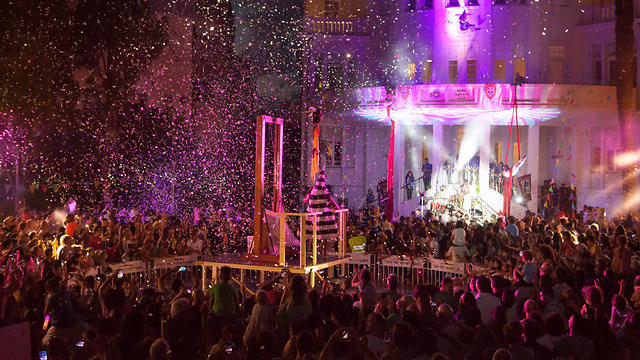 Dancing, performances, theater shows, video installations, circus acts and more—these are just some of the events included in Tel Aviv's White Night 2017 celebrations, taking place on Thursday and lasting throughout the night.

Dozens of "White Night 2017" events will take place throughout Tel Aviv on Thursday from early evening hours until the early morning.

The events are open to the general public, free of charge or at reduced rates, and will include music, theater performances, dancing and dance performances, video installations, meetings with artists and writers and, nighttime sports and more.

White night celebrations, Bialik Square (Photo: Noa Ben Shalom)
This year, special emphasis was placed on the southern part of the city, where dozens of attractions will be waiting for attendees.

Want to plan your track? Here are some things that you shouldn't miss:

The EU Delegation in Israel presents "Performance Europe"—a celebration of urban art exhibits from seven countries on the continent. Rothschild Boulevard 1 will become an art complex for the entire family. Performances include dance performances, acrobatics, art and electronics performances, laser shows, music and more. The event ends at a party into the small hours of the night.

Tens of thousands are expected to dance at a headphone party in the concert hall in Rabin Square. They will use the earphones of their smartphones, or rent earphones instead, so that the party's music will not disturb the neighbors.

The old central bus station is going to star in the evening. An international food market will be established there, with delicacies from every continent at a price of NIS 10-30 per serving. The complex will include the newly completed Midburn installations: Jacob's Ladder—a 50-meter light ladder, The Pirate Ship—a three-level ship offering an active experience for all ages, and more.

You can also walk on an experiential route between Rothschild Boulevard, the old Central Bus Station, the historic Electric Corporation compound and Ginat HaSharon. A large video display will transform the structure of the power station transparent and expose the dense grid, and the historic water tower will become a torch that will illuminate the sky.

There is, of course, much more, so come visit Tel Aviv Thursday night for a once-in-a-year experience.