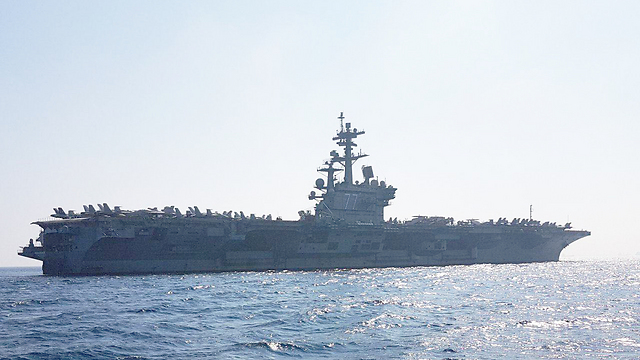 The fleet's in, Israel: Haifa residents who turn their eyes to the sea Saturday will be able to see the USS George H. W. Bush, which is too big to dock; about 5,700 crew members serve on the aircraft carrier, which towers 20 stories high and is powered by two nuclear reactors.

For the first time in 17 years, a US aircraft carrier is anchored off the coast of Israel. The USS George H. W. Bush anchored Saturday morning about 4 km from the breakwater of the port of Haifa, being too large to dock at the port itself. The war machine will stay in the area until Wednesday.

The carrier is accompanied by several other US Navy ships, which serve as its strike group, including the USS Philippine Sea, USS Hue City and the Danish frigate Peter Willemoes.

Said Katish, one of the veteran navigators at the Haifa port, boarded the aircraft carrier this morning and directed it to the docking point.

The ship runs an impressive 333 meters, and the length of its runway is 200 meters. It rises 20 stories above sea level and is powered by two nuclear reactors.

Haifa port can handle vessels larger than 300 meters docking, and the water depth isn't a problem either, but the American ship is too wide for the port to handle: the width of the upper deck of the aircraft carrier, which includes the runway and airplane parking area, does not allow it to dock there.

The aircraft carrier has about 80 fighter planes, as well as helicopters and various weapons to protect the ship itself. The ship's crew numbers about 5,700, about 2,500 of whom belong to the US Air Force. The rest are sailors.

During its stay in Israel, Israeli officials and military officers are expected to visit USS George H.W. Bush, including Prime Minister Benjamin Netanyahu and Defense Minister Avigdor Lieberman. The crew will also celebrate the 4th of July, the US Independence Day, at the Haifa Port.

The fleet is in. (Photo: Momi Gabai/Haifa Port)

The USS George H.W. Bush has recently played a significant role in the fight against ISIS. Every day, F-18 Super Hornet jets take off from this aircraft carrier to bomb ISIS targets in Syria and Iraq.

Two weeks ago, one of these F-18s shot down a Syrian Sukhoi Su-22 after it dropped bombs near the Syrian Democratic Forces, an opposition group supported by the US-led coalition.

In the 1980s and 1990s, Haifa Port was the home port of the US Navy's Sixth Fleet, where tens of thousands of sailors arrived each year and contributed greatly to the economy of the city. However, with the outbreak of the second Intifada in 2000, the American ships ceased to visit the port. In 2007, an American ship returned to Haifa, but an aircraft carrier had not visited the city for 17 years.