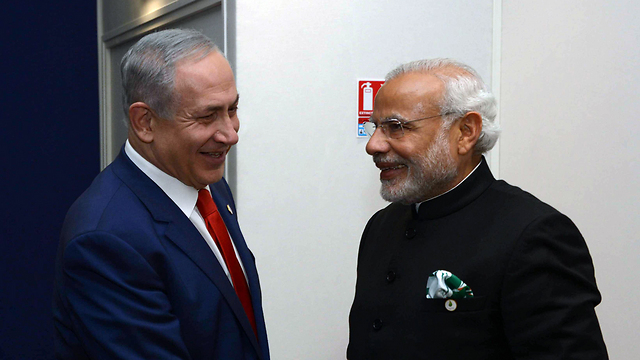 During his busy visit, Narendra Modi is expected to watch demonstrations and presentations by Israeli innovation companies, visit Yad Vashem and meet with 10-year-old Moshe Holtzberg, whose parents were murdered in a 2008 terror attack at the Mumbai Chabad House.

Indian Prime Minister Narendra Modi will arrive in Israel on Tuesday for a historic three-day visit, during which he will sign seven cooperation agreements between the two countries.

This will be the first time an Indian prime minister visits Israel, attesting to the warming of ties between the two countries after years of a behind-the-scenes thriving military relationship.

India has traditionally trodden a careful diplomatic line in the region, wary of upsetting Arab states and Iran—upon whom it relies for its vast imports of oil—and its large Muslim minority population, which numbers at 180 million. It has been a vocal supporter of the Palestinian cause, even as it quietly pursued ties with Israel, which has also taken steps toward India.

Prime Minister Netanyahu meets with Modi in Paris (Photo: Amos Ben-Gershom, GPO)
Modi is not scheduled to visit Ramallah on this trip, but he has invited Palestinian President Mahmoud Abbas to visit New Delhi. The visit will focus on a series of military deals worth billions of dollars as well as strategic partnerships in areas including water, agriculture and space technology. Modi will land in Israel at 4pm Tuesday and be received by Israel's top leadership in a state ceremony at Ben-Gurion International Airport. From the airport, Modi will make his way to Moshav Mishmar HaShiv'a, where he will visit the Dan Farm, one of the leading flower farms in Israel. At the farm, Modi will watch an Agriculture Ministry demonstration of some of Israel's latest agricultural technologies, including a state-of-the-art irrigation multicopter drone and a thermal camera. Israel is expected to build seven new agricultural excellence centers in India by the end of the year, adding to the existing 15 it already has. Later, Prime Minister Benjamin Netanyahu will accompany Modi on a visit to the Yad Vashem Holocaust Museum in Jerusalem, where the Indian premier will lay a wreath, visit the Children's Memorial, and sign the guest book. On Tuesday evening, Modi and a small entourage will have dinner at the Prime Minister's Residence in Jerusalem. At the same time, the Foreign Ministry's director general and the acting national security advisor will host a dinner at the King David Hotel attended by their Indian counterparts along with other members of the Indian delegation. On Wednesday, Modi will meet with President Reuven Rivlin and then with Prime Minister Netanyahu. The Indian prime minister will also meet with Opposition leader Isaac Herzog (Zionist Union) and later visit the exhibit on Indian Jewry and the Cochin Jews synagogue at the Israel Museum.

President Rivlin meets with Modi during a visit to India (Photo: Reuters)
Later, he will meet with Indian expats living in Israel, including diamond dealers from India. One of the expected highlights of the visit is Modi's planned meeting with 10-year-old Moshe Holtzberg, whose parents were murdered in a 2008 terror attack at the Chabad House in Mumbai when he was a toddler. Moshe's Indian nanny Sandra Samuel, who managed to remove him from the carnage and bloodletting, will also be at the meeting. On Thursday, Modi will visit Haifa, where he will lay a wreath and unveil a plaque in memory of Indian soldiers buried at a cemetery in the city who were killing in the battle for Haifa during World War I. He will also meet with some 20 Indian soldiers serving in the United Nations Disengagement Observer Force in the Golan Heights. He will then head to Dor Beach to watch a desalination demonstration using a water purification vehicle by GALMOBILE, following which he will fly to Tel Aviv to watch presentations by Israeli innovation companies. Modi will also meet with Indian students who are completing their education in Israel. At 5pm Thursday, the Indian prime minister will leave Israel, not before taking part in a state ceremony at Ben-Gurion Airport. Modi will arrive with a business delegation including about 100 entrepreneurs. Among the delegates will be 15 senior executives of Indian companies—such as Wipro, Reliance, Adani, Tata, Jain, Infosys and Mahindra—who will take part in the founding of a joint forum for CEOs from both countries. Ahead of the visit, Israel's Embassy in India produced a video showing Israelis welcoming Modi in Hindi. The Indian premier shared the video on his popular Twitter account, where he has 31 million followers. The video got 17,000 likes and 4,300 shares. The Indian Foreign Ministry has produced its own video to mark Modi's visit as well as 25 years to the establishment of diplomatic ties between the two nations. The video emphasizes the similarities between the Indian people and the Israeli people and praises the cooperation between the two nations. It also includes footage of tests for Barak missiles, which were developed in a joint project between the two countries. Since Israel and India formally established diplomatic relations 25 years ago, trade has increased 2000 percent, according to Israel’s Ministry of Economy. In the past decade alone, Israel’s exports to India have risen a total of about 60 percent, despite a slight decrease last year. Israel-India trade in general has risen from $200 million in 1992 to $4.167 billion in 2016.

"India is a major and important export destination for the development of Israeli export," said Economy Minister Eli Cohen. "The tightening of political relations with India and the historic visit of the prime minister of India to Israel will lead, beyond defense exports, to increased deals in commerce and services as well."

The Media Line and Reuters contributed to this story.