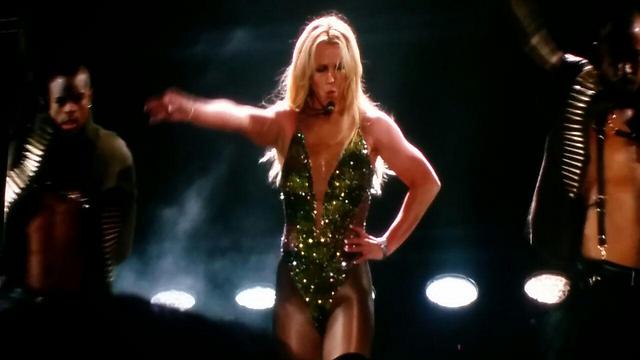 55,000 fans pack into Yarkon Park in Tel Aviv as Britney Spears performs her classic hits to screaming Israeli fans, unfazed by the heat, telling audience to ‘rip the roof off this place.’

Love her, hate her, say what you want about her, but audiences crammed into Tel Aviv's Yarkon Park to see Britney Spears perform Monday night in what was her first show in Israel.

Neither the rising temperatures nor the ever-present ennui that comes with the slow realization of one's mortality stopped 55,000 fans from making the pilgrimage to Spears's show. The roaring fans were not dissapointed as when Britney opened with her 2013 hit single Work Bi***.

And work she did. Clad in a cape, a jaunty hat, thigh-highs and a shimmering green unitard, Spears descended from a pedestal to the right of the main stage as laser beams and smoke accompanied her every move.
Spears speaks directly to those gathered beneath her
X

Spears speaks directly to those gathered beneath her

"Hello Tel Aviv, let's tear the motherf****ng roof off this place!" Spears yelled to her electric fans, the stars shining above her at the open-air arena. She quickly moved on to Womanizer, then Break the ice (Yeah she did!) and then Piece of Me, which is also the name of her current tour. It was fair to say that at that point, everyone in attendance felt that she had, in fact, given them a piece of her soul.

DJ Dalit Rechester warmed up the crowd and was followed by singer Eliad, before Spears brought it home. Spears herself will be heading home after her show in Israel, which is to end her Asian tour.

Photo: Ido Erez
Some of the other timeless classics included in Spears's show were I'm a Slave 4 U, Oops… I Did it Again, and her one-woman PSA against domestic violence, Hit Me Baby One More Time.

Photo: Ido Erez
Spears landed in Israel early Sunday morning. By evening, she had visited the city of Jerusalem and paid her respect to the Western Wall.

She was slated to meet Prime Minister Benjamin Netnayahu on Sunday evening, but their sit-down was canceled due to an earlier raucous surrounding caused by adoring, if slightly overeager fans. "Hundreds of people jumped on her, and she decided to cancel it all," said sources close to Spears.

The Spears-Netanyahu power meeting was also supposed to be attended by children battling cancer. However those in Spears's inner circle said that she would meet with them on Monday, and that they would be invited to her show.