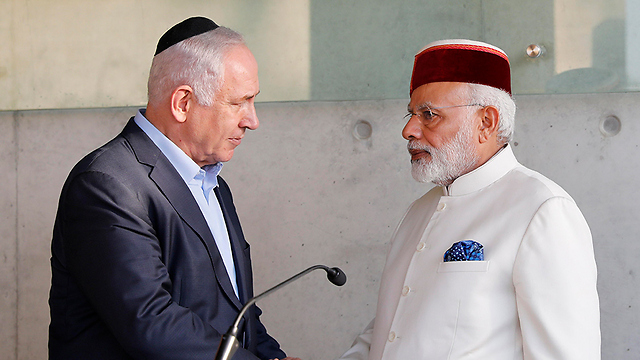 After a day of visits to significant sites and witnessing Israeli innovation, Indian PM Modi visits Prime Minister's Residence, where Netaynahu warmly tells Modi he is starting Yoga 'at a low level,' adding, 'In the morning I'll turn my head to the right, India is the first democracy that I'll see. And when Prime Minister Modi turns his head to the left, Israel is the first democracy that you can see.'

Indian Prime Minister Narendra Modi, who landed in Israel on Tuesday, had a busy first day as Prime Minister Benjamin Netanyahu took him to visit several sites of historical significance, as well as witness Israeli innovation.

"You have already visited Yad Vashem, you paid your respects at the tomb of the founder of our national movement, Theodor Herzl and you've seen some of Israel's cutting edge technology. We went to a greenhouse on a warm day, believe me it was a warm reception," Netanyahu said at a press conference with Modi on Tuesday evening. "So, you've had a glimpse of our painful past but also of our promising future. And we're very excited to host you here."
Prime Ministers Netanyahu and Modi at joint press conference    (צילום: גיל יוחנן)
X

"We both seek a better future for our peoples," Netanyahu continued. "Doing so requires a lot of work. It won't happen overnight, but Prime Minister Modi and I have the same trait—we both want it to happen overnight. We are tireless reformers, and I want to congratulate you, Prime Minister, on the reforms that you're doing to change India's economy. And we both believe that we can do together great things for the betterment of the future of our peoples."

Netanyahu spoke of the similarities between the two nations, adding that "Together, (Israel and India) account for about 20 percent of the world's population. But although we are unequal in size, we're equal in spirit. We believe we can accomplish great things. We have accomplished great things and we have many many more opportunities to seize together in the future.

"But I have to say that we also face common challenges and the first of it is to defeat the forces of terror that rampage through the world and threaten both our countries. So we must stand together in this battle, much as we work together to perfect the future."

Netanyahu and Modi visit Yad Vashem (Photo: EPA)
The two leaders, who have talked of a continued correspondence throughout the years, recently had a friendly exchange on Twitter. On June 21st, also known as International Yoga Day, Modi tweeted, "I urge the citizens of the world to continue practicing Yoga regularly & make Yoga an integral part of your lives. The benefits are many." Netanyahu then retweeted his recommendation, adding, "Great idea PM, @naredramodi. The Middle East has too much tension. Maybe down-facing dog will help?"

"I have to confess to you that I've been inspired by Prime Minister Modi's enthusiasm for Yoga to begin," Netanyahu said Tuesday. "He said to me: you can start at a low level, choose your level. So I'm starting at a low level and here's what we're going to do. When I do a relaxing Tadasana pose, in the morning I'll turn my head to the right, India is the first democracy that I'll see. And when Prime Minister Modi does a relaxing pose of Vasisthasana and he turns his head to the left, Israel is the first democracy that you can see."

Modi followed Netanyahu's speech with his own by saying, "Those who believe in humanity and civilized values must come together and defeat it at all costs. As such, we must resiliently oppose the evil of tyranism (sic), radicalism and violence that plague our time. Friends, the link between our people go back thousands of years, when the first Jews landed on India's southwestern coastline. Since then, the Jews have flourished."

After arriving in Israel earlier Tuesday, Modi told members of an Israeli and Indian delegation that his country considers Israel to be “one of its most important partners.” During his historic three-day visit, Modi will sign seven bilateral agreements with Israel.

Speaking at the welcome ceremony, Netanyahu said that Israel welcomed Modi "with open arms. We love India. We admire your culture, we admire your history, your democracy, your commitment to progress."

"We view you as kindred spirits in our common quest to provide a better future for our peoples and for our world,” Netanyahu added before recalling the first ever meeting that took place between him and his Indian counterpart at the United Nations three years ago.

"We agreed to break down the remaining walls between India and Israel. We shook each other's hands and we agreed to forge a historic partnership for progress. We then met again in Paris and since then we've spoken many times on the phone. But I remember my friend what you said in that first meeting. You said that when it comes to India-Israel's relations, the sky is the limit," Netanyahu said.

Delivering his remarks after Netanyahu, Modi opened by saying in Hebrew, "Shalom, I am happy to be here," adding that it was a "special honor for me to be the first Indian prime minister ever to make the revolutionary visit to Israel."

Thanking Netanyahu for the invitation and warm welcome, Modi also mentioned the prime minister’s brother, Yoni Netanyahu, who fell in the heroic raid on Entebbe. "Your hero is an inspiration for our young generations," he said.

"India is a young nation, in which talented youth is the driving force. In a world where rapid progress and development is taking place, India considers Israel as one of its most important partners," Modi declared.