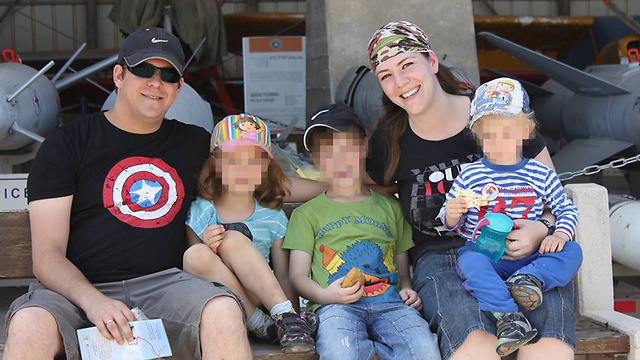 Michal Salomon, wife of Elad Salomon who was stabbed to death in Friday's terror attack along with his sister and father, recounts the terrible night from the moment she realized something was wrong to the eerie silence that followed the screams and gunshots; Michal: 'It was important for me to keep the children safe first, no matter what.'

Michal Salomon spoke about the deadly terrorist attack that cost the lives of her husband, sister-in-law and brother-in-law. After a pleasant family celebration of the birth of her son, Michal sat with her children in the living room when she heard a man speaking in Arabic, and ensuing raised voices. Realizing the danger, she did not think twice—taking her children and running off to the top floor of the house.

"I started hearing screaming and shouting," Michal recounted. "I held the door with all my strength because it couldn't be locked. I lost my sense of time but did not let go of the door knob.

"I called the police and told them what's happening, while the children were around me."

Elad and Michal with three of their children
Michal and her husband Elad arrived at the Neveh Tzuf-Halamish settlement to visit his parents. Last week, a new child was born to Elad's younger brother Shmuel, and it was decided that the Friday night meal would be in celebration of it, with relatives and neighbors invited to attend. They sat together for a festive Shabbat dinner with their aunt Haya. After dinner, Michal retired to the living room with her children, while the rest of the family gathered in the kitchen. "I saw the profile of a person who went into the kitchen," Michal recounted. "The terrorist apparently saw them through the window and entered the house. He did not see me and went straight to them. "I heard him asking them in Arabic: 'What is your name?' And I immediately realized that something was wrong. That something bad was happening."

The terrorist in cuffs after the attack
"I immediately took the three children upstairs quickly. It was important for me to keep the children safe first, no matter what," she explained. While Michal barricaded herself in the room with her children, aged five, nine and eleven, and twins about a year old, she called the police and described what's happening, with the children hearing every word. Michal continues, saying she heard "horrible screams and gunshots," and after waiting for what "felt like an eternity," she came downstairs and immediately realized her husband was no longer among the living, murdered along with his sister and father. Elad, a father of five, was 35 at the time of his death. His friend Assaf said: "Elad was a joyful man and a devoted father. He took a break from work to be with the twins who were born about a year ago, while his wife went back to work. He was a great friend and family man.

"He was religious but had secular friends, like me. He was always fun to be around. Elad was also very attached to the Land of Israel, the salt of the earth. He was a moderate, and did not like talking about politics."

Elad's mother, Tovah, 68, who was wounded in the attack, underwent surgery at the Shaare Zedek Medical Center early Saturday morning and her condition stabilized.

At dawn, when she recovered, she was told of the tragedy that had befallen her family.

"She lost her whole world," said a family member at the hospital. "She said the physical pain was far less difficult than the emotional pain and the grief."

The doctors are hopeful that she can recover enough to attend the funerals of her family on Sunday afternoon.

At a different floor in the same hospital, the mother of her new grandson, whose birth they were celebrating at the dinner, is recovering after giving birth. Tovah's son, Shmuel, spent the weekend running between the different wards to be with both—the joy of his son's birth pushed aside by the heavy grief that descended upon his family.