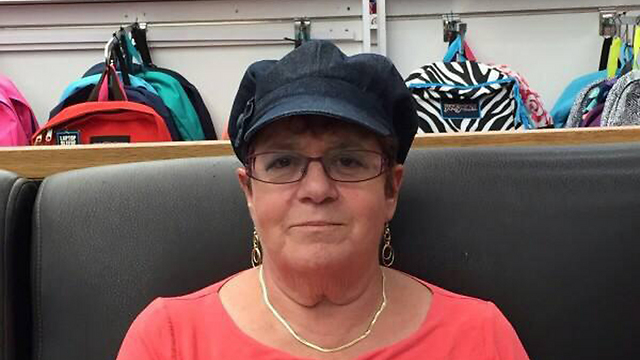 Grandmother in Halamish terror attack: 'terrorist laughed and pulled out a knife'

From her hospital bed, wounded and in pain from last Friday's stabbing attack that took lives of her husband, daughter and son, Tova Salomon tearfully recalls that horrifying night; 'The terrorist wore a white shirt and turned to me with a wide smile, so I thought he had come to celebrate the birth of my grandson,' she says, adding, 'I won't return to that house.'

Just before the funerals of the three members of the Salomon family who were murdered by a Palestinian terrorist last Friday in the West Bank settlement of Halamish during Shabbat dinner, an intensive care unit entered the Modi'in cemetery. Wounded from the terrorist's stabbing, Tova Salomon (68) was helped out of her wheelchair, next to the three stretchers on which the shrouded bodies of her husband Joseph (70) and their children, Chaya (46) and Elad (35) lay. The sound of weeping could be heard throughout the cemetery.

After the funerals ended, Tova was was taken to Sha'are Zedek Hospital in Jerusalem, where she is still recovering. She does not intend to return to her house in Halamish. "I'm not going back there," she told the friends who came to visit her in the hospital on Sunday. Tami Hofi, a neighbor and close friend of Tova's, said that Salomon was crying and has yet to realize the extent of her loss. Salomon does, however, remember the tragic events of Friday night, which took place in the middle of a celebration of the birth of another grandson in the family.

"It was supposed to be Shalom Zachar (a Jewish-Ashkenzai celebration in honor of the birth of a son—ed) for the new grandson, and the door was not locked, so when someone knocked on the door, we thought it was a guest," Salomon reportedly told her Friend Hofi. "Chaya opened the door, he stabbed her and she ran away from the house and screamed out to call people, but even then I did not realize it was a terrorist."

"I approached the door, the terrorist turned to me with a wide smile. He wore a white shirt with dark pants and I thought it was someone who had come to celebrate Shalom Zachar who I maybe did not know, so I asked him, 'Who are you?' He laughed in my face, and then he pulled out a knife. I realized what was happening, bent over and turned my back to him so that if he were to stab me, he would hurt my back and not my neck."

Tova continued to describe the moments of horror: "I saw him running toward my husband, Yossi, but I did not see exactly what happened, only that Yossi fell and then that the terrorist ran to Elad and that Elad fought him for a long time. Elad was no match for him, with the terrorist coming toward him with a knife, but he blocked him for a few critical minutes to save his family. "At that moment, I didn't know where Chaya was. I hoped she had been saved by hiding in the bathroom. We looked for her inside the house until we realized she went out to call for help, and that she was gone. Her resourcefulness in running to call for help, and that of Elad's who saved his wife and five children, are the only things that comfort me in my terrible pain."