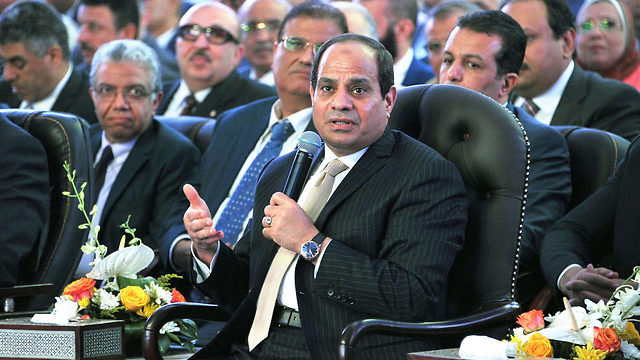 Egypt's El-Sisi calls on Israel not to provoke Muslims

Egyptian President Abdel Fattah el-Sisi directly addresses the Israeli public and government, calling on both not to take steps that provoke Muslims; El-Sisi: 'We want to live side by side and that is a shared issue that we need to protect.'

Egyptian President Abdel Fattah el-Sisi addressed Israel in a speech Monday, calling on its residents and leaders to "stop what is happening in the Al-Aqsa Mosque and not to provoke the feelings of Arabs and Muslims."

El-Sisi, who was speaking to a young audience in Alexandria, answered a question from an audience member on the issue and said, "The unfortunate events at Al-Aqsa are causing an unnecessary situation. I appeal to public opinion in Israel, the Israeli people and the Israeli leadership—please, this must stop.

"There is no escaping the fact that the feelings of Muslims need to be respected in relation to their holy places. Al Aqsa is something very sacred to Muslims."

El-Sisi continued, adding, "It is very important not to stir sensitive issues or commit violations or steps that provoke Muslims, whether they be in Palestine or the entire Islamic world. Let us respect one another."

Similarly, el-Sisi also appealed the Egyptian public, saying, "Do not take advantage of these events to throw around exaggerated slogans and say that 'we are the defenders.' We want to live side by side and that is a shared issue that we need to protect. The Palestinians needs to keep this in mind and so do the Israelis."

In addition to el-Sisi, other Muslim nations joined the chorus, with Jordanian official media reporting, "King Abdullah spoke with Israeli Prime Minister Benjamin Netanyahu. They spoke about the crisis at the Al Aqsa Mosque and stressed that the reasons that led to the crisis should be removed so that a solution can be reached that will restore the situation to its former status.

Erdoğan condemned Israel's use of "excessive violence" during the clashes in east Jerusalem and called the three Palestinians killed in the unrest "martyrs."

Following the closure of the Temple Mount as a result of the terror attack that killed two Israeli policemen, the Arab League announced, "All attempts to change the natural and historical status quo in the mosque should be stopped."

The League also strongly condemned Israel for "continuing its assaults and attacks on the Al-Aqsa Mosque," noting the "dangerous implications for the region and the Arab and Islamic world."