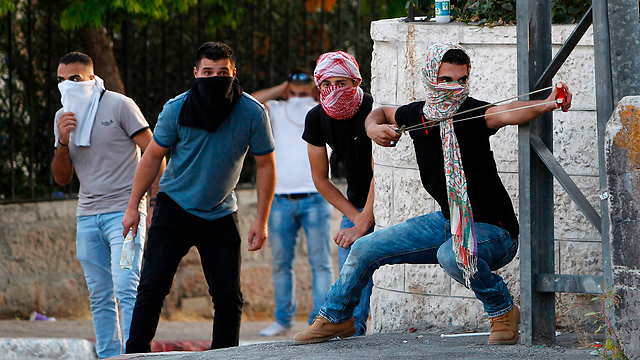 The Palestinian coalition behind the demonstrations and processions in the West Bank against the added security measures set up at the Temple Mount following a deadly terrorist attack at the site earlier in the month, in addition to leaders of the Fatah party's military wing the Tanzim, gathered Wednesday in the offices of the Fatah leadership in Ramallah and decided to dedicate Friday to promoting confrontations between their supporters and Israeli security forces.

The decision constitutes a more extreme call to arms: last week, Fatah channeled its rallies to demonstrations held within Palestinian cities, while Wednesday's call is for out-and-out confrontations with security forces.

Fatah Spokesman Osama Qawasmeh stated that the steps taken by the Palestinian leadership, such as ending security coordination and calling for demonstrations under the name were responsible calls to action.

"The matter has to do with sovereignty over Jerusalem, and the ball is in Israel's court, and it will be the one deciding whether the region is moving toward a calm or an escalation," Qawasmeh said, adding that Fatah opposes searches of the worshipers and stressing that if necessary, the demonstrations will continue.

Fatah member Nasser Al Qudwa held a press conference earlier Wednesday and called on Israel to remove all security measure added to the Temple Mount after July 14 when the attack took place which claimed the lives of two policemen.

Al Qudwa, who is the nephew of deceased Palestinian Liberation Organization (PLO) leader Yasser Arafat, also gave a statement. "The removal of metal detectors is not enough. Israel must cancel all of its moves. Most of the gates to the Temple Mount are (currently—ed) closed, and more precisely, seven out of nine."

Jordan's King Abdullah called Abbas on Wednesday evening, and the two discussed the recent developments in Jerusalem and the al-Aqsa Mosque. They agreed to combine efforts and continue with joint consultations.

Meanwhile, Hezbollah Secretary General Hassan Nasrallah congratulated the residents of east Jerusalem and the Palestinians in the West Bank who rallied against Israel's added security measures outside the al-Aqsa Mosque: "They imposed a victory. What we have seen in recent days is a victory. This is a new model of resistance," said Nasrallah.

Hamas's military wing protests against added Israeli security measures (Photo: AFP)
Also earlier in the day, Hamas security services held a military parade in the Gaza Strip "in solidarity with the al-Aqsa mosque and in protest of the Israeli harm to it."

The armed display, which included representatives from all different security services, made its way through the streets of Gaza City towards the Palestinian Legislative Council building. Hamas also called on its members to rally on Friday after noon prayers and make their way to the border fence, where there are often clashes with Israeli security forces.

Ahmad Bahar, the deputy speaker of the Palestinian Legislative Council and senior Hamas member, also participated in the parade. He claimed that "Israel is trying to deceive the Palestinian people by removing the metal detectors and installing cameras. The Palestinian resistance will continue to be at the forefront of the defense on the Palestinian issue and in al-Aqsa."