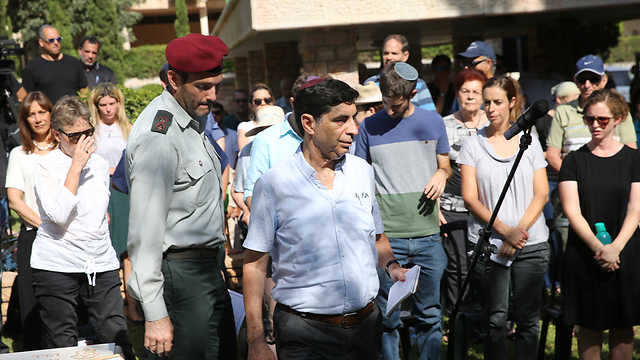 A memorial ceremony is held marking 3 years since the fall of Lieutenant Hadar Goldin in Operation Protective Edge, as his bereaved father blasts the Israeli government for failing to live up to their word to return his body home.

His father, Simha Goldin, attacked the government's conduct, who promised to return Hadar's body from the hands of Hamas to be buried in Israel, but failed to do so. "IDF soldiers are repeatedly abandoned at the hands of the enemy," he said. "Defense Minister Lieberman is not working to correct the situation and promised before he was elected to return Hadar and Oron within 48 hours."

Simha Goldin stepping up to the podium (Motti Kimchi)

The father said that the defense minister had been invited by the family to attend the memorial, but claimed that Lieberman chose not to come.

"There was a guarantee from the state to bring them to be buried in Israel. There was a promise from the ministers and the prime minister. We demand that this will be the last year in which the things that are by government representatives turn out to be just talk," he said, adding that they need the aid of the Israeli leadership, but that he "unfortunately" feels "ashamed of the behavior of the leadership." "Representatives of the State of Israel went to Cairo before the end of the operation and reached an agreement with Hamas and left Hadar and Oron in the hands of the enemy," Simha continued. "This needs to be fixed and we will fix it."

"Our hearts go out to you, we pray that you too will have the pride of bringing your son to rest," Shnaan said. "I have one request on this difficult day: We must be strong and our spirit must not break. None must learn that we can be extorted and are willing to pay any price. This country cannot exist under extortion."

The commander of the Givati Brigade, Colonel Dado Bar Kalifa, said: "Hadar's path, which was soaked in the love of the people and the country, undoubtedly reflects the values he absorbed in his home at school and in the preparatory school. Hadar's friends tell of a special person with rare traits. He was a bold and courageous officer and commander who believed in the righteousness of our mission.

"The State of Israel, the Israel Defense Forces and the Givati Brigade are committed to bringing him home as quickly as possible."