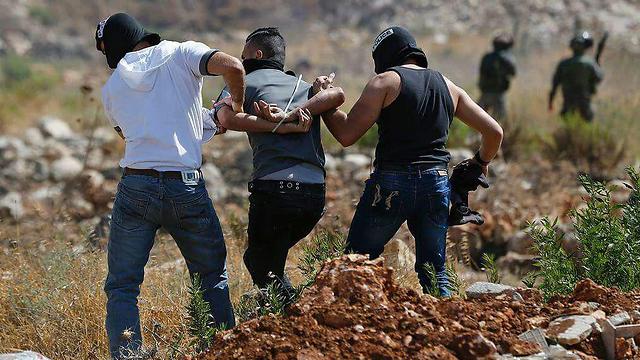 As violent riots rage in major cities throughout the West Bank and along the Gaza border fence, Border Police undercover commandos infiltrate the crowds to nab three central instigators.

As hundreds of Palestinians rioted on Friday in several different locations throughout the West Bank and along the Gaza border fence, the Border Police's elite undercover unit infiltrated the crowds and arrested three central instigators in the violence.

The three suspects were all Palestinian residents of Ramallah and were transferred to security forces for further questioning.

In addition to Ramallah, violent disturbances were recorded in Hebron, Rachel's Tomb, Nablus, Tulkarm and Qalandiya as a result of the ongoing tension over the Temple Mount and the return of worshippers to the sensitive compound.

Dozens of rioters blocked roads, burned tires and hurled rocks at IDF and police forces who were dispatched to the area to maintain order.

The IDF also reported that one Palestinian rioter was detained in Hebron.

Earlier in the day, Palestinian outlets reported that 16-year-old Abed al-Rahman Abu Hameiseh was killed in clashes with IDF forces near the border fence in the central Gaza Strip.

The IDF confirmed the violent protests in a statement, saying, "In the past few hours, violent riots have begun throughout the Gaza Strip, involving dozens of Palestinians in several locations along the perimeter who are burning tires and throwing stones at IDF forces. In the course of the violence, an IDF force fired at a number of key instigators."

The IDF also reported that a soldier was lightly wounded by stone-throwing rioters near Qalandiya. He was evacuated for medical treatment.