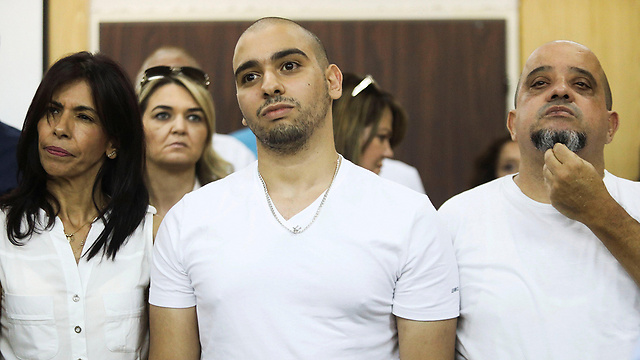 Defense minister calls on the Azaria family to not submit a further appeal, but rather to request a pardon from the Chief of Staff; other gov't officials weigh in and call for a pardon.

Minister of Defense Avigdor Lieberman took to Twitter on Sunday, asking Elor Azaria and his family not to file another appeal over his 18 month prison sentence.

"I ask the Azaria family not to file an additional appeal, but rather to appeal to the Chief of Staff for a pardon. I have no doubt that the Chief of Staff will take into account all the difficult circumstances and that he (Elor) was an outstanding soldier," Lieberman wrote.

Elor Azaria with his parents in court Sunday (Photo: Reuters)

In addition to Lieberman, Prime Minister Benjamin Netanyahu also touched on the subject, saying, "My opinion has not changed on the granting of a pardon to Elor Azaria, as I expressed following the verdict. When the subject is brought up for practical discussion, I will forward my recommendation for amnesty to the relevant parties."

Despite calls for a pardon, sources at the Office of the President said that thus far, no such request has been submitted to President Reuven Rivlin.

The same sources also added that Rivlin will most likely allow Lt. Gen. Eisenkot to handle the request.

Should Azaria request a pardon from Rivlin exclusively, Azaria will have to take into account that such a request entails an extended process of deliberation involving the IDF Military Advocate General, the head of the IDF's Manpower Directorate, the Chief of Staff and the Minister of Defense.

In addition to both Lieberman and Netanyahu, other government officials such as Bayit Yehudi Chairman and Minister of Education Naftali Bennett and Minister of Culture and Sport Miri Regev have expressed their support for pardoning Azaria.

In a statement, Bennett said, "The verdict is difficult, but the court must be respected. Now, after a year and a half of trials, it is time to pardon Elior Azaria. For the sake of our fighters who are on the front lines and in order to prevent the loss of our power of deterrence, Elor must return home."

Regev also issued a statement, saying, "Elor Azaria is an outstanding soldier and should have been home a long time ago now. Now it is under the IDF's authority and they should give him backup. Pardon him. And the sooner the better."