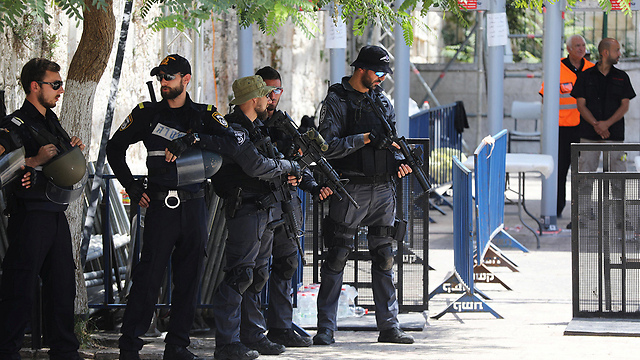 How are security decisions made in Israel?

Op-ed: Who said the range of possibilities in the Temple Mount crisis was between placing metal detectors or not? There may have been other alternatives, like using the 48 hours the site was closed to reach an acceptable formula with Jordan and avoid having 1.3 billion Muslims against us.

The high tensions around the Temple Mount seem to be subsiding. If things go on like this, the discussion should be diverted from the metal detector issue to a wider look at the way decisions are made in Israel.

Every decision on an important issue requires us to address three concepts: Assumptions, interests, alternatives.

Assumptions are assertions we make before discussing a certain question. The assumptions aim to describe reality, and we should start the discussion there.

Metal detectors at the Temple Mount. We have a tendency of giving up the examination of alternatives and reaching a decision right away (Photo: Reuters)

As for Jerusalem in general and the Temple Mount in particular, there is one long-standing assumption: The status quo doesn’t reflect the Muslim aspiration, but rather a fragile acceptance of a reality that has been created, which is why Muslim groups will gladly use every opportunity they get to launch protests. They will, of course, accuse Israel of wanting to change the status quo, but the truth is the other way around: They are the ones who want to change it, and they’re just looking for an excuse to act accordingly.

So it’s not enough for us to claim something doesn’t constitute a change in the status quo, as we did in 1996 with the opening of the Western Wall Tunnels, or as we did with Ariel Sharon’s visit to the Temple Mount in September 2000. As far as the other side is concerned—then and now—when we brought in the metal detectors, we violated the status quo. The truth isn’t important. The important thing is not to give any strife monger an excuse. A more important issue is the definition of interests. A national interest is neither a heart’s desire nor a slogan. An interest is an important thing, and we must be prepared to pay a price to achieve it. Every discussion of every issue must begin with an attempt to agree on our interests, and if they contradict each other—trying to agree on which is the more important one.

Clashes in Bethlehem over the metal detectors on the Temple Mount. Muslim groups are just looking for excuses to launch protests (Photo: AFP)
Let’s take Gaza, for example. In my opinion, Israel has no interests in regards to Gaza apart from a pure security interest. We have no economic interest there, we have no territorial interest and we have no political interest. There are some people, however, who argue we do have a political interest in Gaza—for Hamas to be ousted and the Palestinian Authority to regain control of Gaza. Regardless of who’s right, it’s clear we can’t hold any practical discussion on Gaza before reaching agreements on the interests.

This third thing is an examination of the alternatives. We have a tendency of giving up this allegedly annoying stage and reaching a decision right away. Sometimes, a bad reality is created and someone offers to do something else to change it. That creates a dichotomic situation with two options: Continuing the current situation versus the proposal to change it. Who says this is the entire range of possibilities? Such a situation existed 13 years ago, for example, around the disengagement plan. The people were divided between supporters and opponents. Who said those were the only possible alternatives?

Back to the Temple Mount. Who said the range of possibilities two weeks ago was between placing metal detectors or not? There may have been other alternatives too, like using the 48 hours in which the Temple Mount was closed to send an emissary to Jordan who would return with an acceptable formula, thereby avoiding a situation of having 1.3 billion Muslims against us.

When discussing alternatives, the decision maker must have at his side an efficient body with no ego or interests, which will be tasked with preparing important topics for discussion through an objective presentation of the entire range of possibilities. With the absence of a National Security Council head for the past year and a half, there is no function creating the high-quality discussion that could lead to better decisions.