If Netanyahu thought he was willing to pay the price and do what it takes, he shouldn’t have caved
Photo: AFP 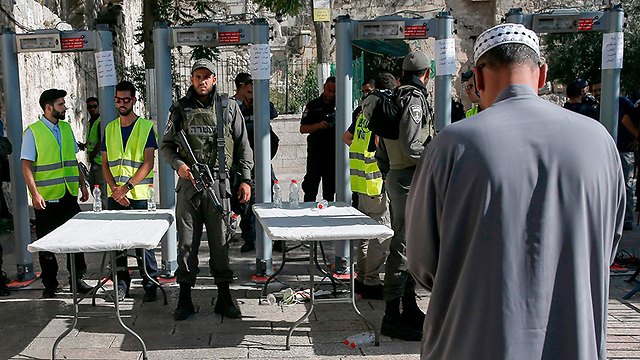 Op-ed: We don’t need the IDF Intelligence Directorate or the Shin Bet to tell us that decisions related to the Temple Mount have an explosive potential. A person who doesn’t know that shouldn’t be a decision maker. The defense establishment’s job is to present scenarios, and the decision makers’ job is to decide, knowing every decision carries a price.

There is a certain stage in the life of a person or a nation in which the excuse turns into a passionate faith. In the past two years, Israel has had a right-wing government. There is no one to politically disrupt any determined diplomatic moves. There are no leftists around or a lack of hands in Knesset votes. Life is allegedly sweet, and all it takes is to make decisions and implement them—till the last metal detector.

I have been writing for years about the steps the State of Israel should take. The list is long: Governance in the Negev and in the Galilee, and enforcement of the law in the Arab sector, an all-out war on the Arab nationalists who hold an Israeli identity card, an annexation of the Jordan Valley and the settlement blocs, construction in Jerusalem and turning the Temple Mount from a third-world country’s religious site to an area controlled by Israeli sovereignty.

Some of these things could be implemented, if only there were a desire to implement them, others would lead to an Arab response and diplomatic pressure on Israel. There is no move in the real world without a price tag. Even an unmade decision carries a price, sometimes a high one.

If Netanyahu believed from the very beginning that the price tag for placing metal detectors at the Temple Mount was too high, he shouldn’t have put them there in the first place (Photo: AFP)

I was in favor of the metal detectors and I thought that removing them was a serious mistake. Not because of God or dreams about a Temple—I have no such dreams—but for the sake of people and so that less blood would be shed. It’s an argument over the components of power in Middle Eastern diplomacy, over the iron wall, over the influence of determination and deterrence. I would love for things to be different, but so far, the Arabs have been proving that what happened in the past will continue in the future.

The difference between a columnist like myself and the prime minister is that I have no responsibility on my shoulders. I try to make a difference through words. In a radical situation, I may find myself with a call-up notice. A prime minister’s words, on the other hand, have a different effect. Sometimes, they turn into handcuffs. They are always responsible for the lives of many people.

The current government’s biggest problem is the huge gap between what is possible and what is said. It’s very hard to come down from the place the words climb to without crashing. In a conversation I had last week with a senior Likud member, he accused Bayit Yehudi leader Naftali Bennett of dragging everyone into an abyss. The Temple Mount, Jordan, Turkey—a Middle Eastern escalation—are all because of Bennett’s irresponsibility. That’s an appropriate excuse. If it wasn’t Bennett, it would have been Likud members in Judea and Samaria, and if it wasn’t them, it would have been a columnist attacking from the right. At the end of the day, with all due respect to the excuses, it’s the leadership’s wisdom which calls the shots.

If Prime Minister Benjamin Netanyahu, unlike me, believed from the very beginning (as he told his associates) that the price tag for placing metal detectors at the Temple Mount was too high, he shouldn’t have put them there in the first place. Criticism from the right doesn’t kill, it passes quickly. There are enough Likud voters who will have faith in Netanyahu even if he places metal detectors in the middle of the street.

If Netanyahu thought he was willing to pay the price and do what it takes, he shouldn’t have caved. The message to the Arab world and to the Islamic Movement is that pressuring Israel is worthwhile. The terrorists’ disgraceful funeral in Umm al-Fahm indicates that they feel a sense of victory, and such a sense only increases the appetite.

Prophecy was given to fools, yet allow me to predict that the flood of right-wing responses from the Prime Minister’s Office on the day after are part of a Jerusalem folktale. Sacred excuses. Cameras won’t be installed on the mountain in the coming months, the Nationality Bill won’t be approved despite its importance, just like it hasn’t been approved on numerous occasions in the past decade, and there will be no manual security check despite the declarations. Why? Because it can’t be done on tens of thousands of people during the Friday prayer.

By the way, if we’re already refuting fairytales, cameras—as smart as they may be—are incapable of completely preventing the smuggling of weapons. So the world, which is searching for solutions, still uses metal detectors and X-ray machines. Ask anyone who enters the Western Wall or passes through an airport. There are face databases and initial metal identification experiments. It’s not there yet, unless the terrorist wears a hate with the caption “Terrorist” on it.

And finally, the price. If I have to keep guessing, more Arab terrorists will arrive through the dam that was breached with the Temple Mount attack. Every terror attack at the site is strategic. If we fail to prevent it with all available measures, there’s a chance we’ll miss the riots that have taken place so far. A chance that it’s not worthwhile even in the short term.

The gap between declarations and reality

The Jordanian interest is to fight Palestinian independence. It’s completely different from what is said in public declarations. The Jordanian government’s biggest nightmare is to find a Palestinian state in the Jordan Valley. That’s one of the reasons the security ties with Jordan are such a significant component in the region, and its details will probably remain confidential even in 50 years from now.

There’s nothing standing in the right-wing government’s way. All it has to do is make decisions and implement them (Photo: Reuters)
The security guard who was seemingly attacked at the Israeli embassy in Jordan before firing his weapon is an excuse. He wouldn’t have stayed there in any event, regardless of the circumstances of the shooting and the percentage of injuries. When excuses become a faith, an incident which should be settled quietly and forgotten is accompanied by a photo opportunity and declarations. I doubt Israel would have reacted with such courtesy to a security guard killing his landlord during an event. A local doctor. This gap between declarations and reality requires a self-examination. It starts with the preoccupation with marginal issues in the past two years. A large part of our public discourse is dedicated to left-wing organizations. The New Israel Fund, the leftists and Breaking the Silence are mentioned in almost every political statement. They are all worthy, I believe, of criticism and a public campaign. The New Israel Fund supports some despicable organizations (it supports many other worthy organizations), Breaking the Silence are harming Israel in international arenas, and the leftists don’t share my opinions, unfortunately. It’s an appropriate battle, but it isn’t something the government and the prime minister should be dealing with in the media. When you engage excessively in a marginal issue, you become addicted. What do you do when there are no leftists involved? You come up with other excuses. The lowest point last week was the attempt to blame the defense establishment for the zigzag policy. We don’t need the Military Intelligence Directorate’s Research Department or the Shin Bet to tell us that decisions related to the Temple Mount have an explosive potential. All we have to do is study history or simply open Wikipedia and read about it. A person who doesn’t know that shouldn’t be a decision maker. The defense establishment’s job is to present scenarios, including the most difficult ones. The decision makers’ job is to decide, to know that there is a price, and—in my opinion—to decide to pay it for the sake of future peace and quiet.