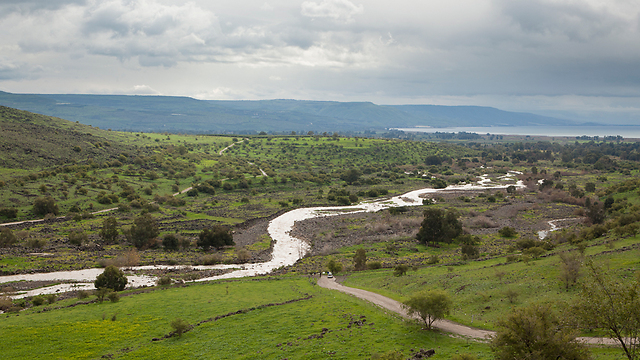 The Ministry of Finance and Water Authority refuse to foot the bill for a desalination project that could save the river but has swelled to NIS 100 million over budget; southern part of the Jordan already in dire straits.

While the Jordan River north of the Kinneret is in danger of drying up, a financial dispute between the government and residents of the Jordan Valley is delaying conservation and rehabilitation efforts in the southern part of the river.

The regional council is supposed to construct a desalination facility that would allow officials to stop pumping irrigation water from the Kinneret and allow clean, treated water to be introduced into the Jordan River.

However, according to the regional council head, the project will cost an estimated NIS 100 million more than planned and the Ministry of Finance and the Water Authority both refuse to supply the missing funds.

The Jordan River, which today hardly deserves the title of "river" in certain places, was once the largest, longest and most significant river in Israel. However, the construction of the Degania Dam in the 1930s led to the drying of the southern portion of the river almost entirely, leading to its ecological destruction.

After years of negotiations, a solution was finally agreed upon to release of 15 million cubic meters of water from the Kinneret and release it downstream into the Jordan.

However, the contractor who won the tender for the project has been waiting for years for the go-ahead to begin work, but in the meantime the cost of the project has jumped and, as mentioned, the Treasury refuses to pay the difference.

The Ministry of Finance issued a statement in response, saying, "After several parts of the plant were built, the Israel Water Association submitted a funding request that deviated from previously agreed budgets by tens of millions of shekels…Financing the continued construction of the plant is currently being discussed."

The Jordan Valley Council issued a statement saying, "We call upon the minister of finance to release the funds that have already been allocated, but not yet been transferred as required."