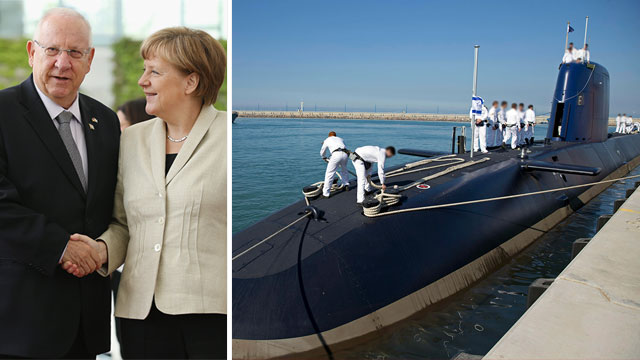 Rivlin and Merkel to meet in Berlin amid submarine scandal

President Reuven Rivlin will meet German Chancellor Angela Merkel in Berlin in September and is expected to smooth tensions related to the submarine affair and lobby for the purchase.

The meeting has not yet been officially announced, but it will take place against the background of Germany's decision to freeze the sale of several ThyssenKrupp submarines to Israel due to investigations into corruption.

In addition to the matter of the submarines, Merkel's meeting with Rivlin also takes place during a period of tension between Israel and Germany, stemming from a spat between Prime Minister Benjamin Netanyahu and German Foreign Minister Sigmar Gabriel. The spat occurred when Netanyahu cancelled a meeting with Gabriel in protest of his meeting with left-wing organization Breaking the Silence.

While the subjects to be discussed have not been released to the public, it is possible Rivlin will raise the submarines issue and will try, on behalf of the defense establishment, to allow the promotion of the deal for the benefit of Israeli security, despite the ongoing investigations into corruption.

The last time Rivlin and Merkel discussed the purchase of submarines was in May 2015. At that meeting, Rivlin expressed concern about Germany's intention to sell submarines to Egypt.

After Germany agreed to sell submarines to Egypt, the possibility arose that behind the scenes there was a tripartite deal under which Israel approved the package deal with the Egyptians, and in return received a substantial discount on the purchase of naval vessels for the defense of new gas platforms.