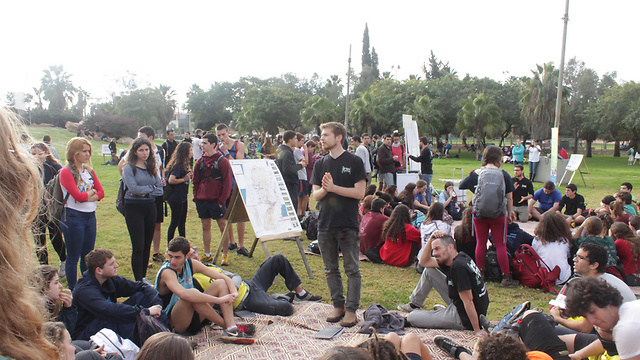 Op-ed: While the NIF does support women’s and environmental groups, it also supports organizations like Breaking the Silence and B’Tselem, which specialize in tarnishing the State of Israel’s reputation in the world through lies and manipulations.

Mickey Gitzin, the new executive director of the New Israel Fund (NIF), has been offended. He read the Facebook post written by the prime minister’s son against Project 61, in which Yair Netanyahu mentioned the “Israel Destruction Fund,” and he was hurt by it.

The project’s creators, members of an NGO called Molad, had more class. In a letter sent to Netanyahu Jr. through their lawyer, they acted as if they didn’t understand what it was all about. “The Israel Destruction Fund”? Does such a thing even exist?

Gitzin, it turns out, is not as levelheaded. He understood exactly what it was about and decided to respond in an op-ed titled “Left-wing NGOs working for all Israeli citizens.” In the article, Gitzin bragged about a series of activities carried out by the organizations supported by the fund, in a bid to prove that the fund contributes to all Israeli citizens, regardless of their opinions and views.

Breaking the Silence members. ‘Reliable testimonies’ about abuse suffered by Palestinians have been revealed as either fantasies or complete lies (Photo: Louise Green)

Okay, Yair Netanyahu is not exactly Mother Teresa and the post he published wasn’t an example of good taste. The phrase “The Israel Destruction Fund” is slightly exaggerated too. It should have been replaced perhaps with the phrase “The fund harming the State of Israel by tarnishing its reputation in the world through lies and manipulations.” Why? Because of quite a few organizations the fund has been supporting every year, for many years, and which Gitzin somehow forgot about when he wrote his article. It may be difficult to remember all of them.

While the fund does support organizations of social importance, like women’s and environmental groups, it also supports organizations like Breaking the Silence, which—according to figures published on the fund’s website—received $32,000 from the fund in 2015. It has been revealed time and again that what the organization’s members define as “reliable testimonies” about abuse suffered by Palestinians are, at best, fantasies and exaggerations and, at worst, complete lies.

Established evidence? Don’t make me laugh. Every attempt made by the state to receive the data from Breaking the Silence in order to interrogate and prosecute those who are allegedly responsible for the horrors has been rejected with different legal excuses. Because Breaking the Silence isn’t interested in justice, it’s interested in slandering IDF soldiers in the world. Gitzin also forgot about B’Tselem, an organization which received $35,000 in financial support from the fund in 2015, and another $210,000 in a “donor grant” (money the fund receives from its donors directly for certain bodies that are predetermined). I wonder why. Perhaps because Israel’s citizens still remember the role B’Tselem played in collecting the testimonies for the purpose of slandering Israel in the Goldstone Report? Perhaps because Israel’s citizens don’t really believe that the organization’s goal is to improve their situation? The attempt to present the fund as a neutral body, which isn’t leading a radical left-wing agenda, is a joke. Here’s a small exercise: Visit the fund’s website and look for one organization on its list with a known national orientation. Not right-wing, God forbid, just an organization that supports IDF soldiers, is in favor of settling across the country (not in Judea and Samaria, of course) or in favor of aliyah. Actually, I can spare you the effort. You won’t find it. Because the fund, contrary to the neutral social-civilian image that Gitzin is trying to create, is a clear left-wing body. There’s a reason why the fund’s former chairwoman, Talia Sasson, tried (but failed) to secure a spot on Meretz’s Knesset list. So instead of whining about the millions arriving in Israel for right-wing NGOs, members of the New Israel Fund should first of all look in the mirror.