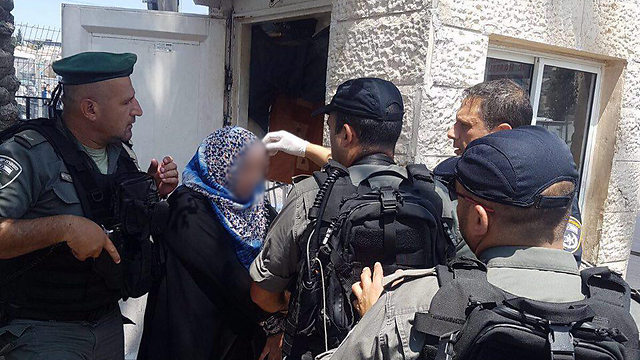 An Israel man was stabbed and lightly wounded in a terror attack on Sultan Suleiman St. near the Damascus Gate in Jerusalem's Old City on Saturday.

The terrorist, a 29-year-old Palestinian woman, was neutralized without injury and arrested by Border Police.

A police spokesman said at around 11:40am, a Palestinian woman armed with a knife approached an ultra-Orthodox man on Sultan Suleiman street and tried to stab him several times, but he managed to escape her.

The terrorist, arrested by the Border Police

The attacker then approached a light rail station near the Damascus Gate on the corner of Bar Lev and Sultan Suleiman streets and stabbed a man, 31, in his hand.

The wounded man was treated by Magen David Adom paramedics on the scene and then taken to the nearby Hadassah Medical Center in Jerusalem's Mount Scopus in light condition. He was discharged on Saturday evening.

Paramedics at the scene (Photo: MDA)

A Border Police force stationed nearby saw the incident, tackled the terrorist and arrested her.

Police said initial investigation pointed to a clear intention by the attacker to harm innocent people.

The knife used in the attack (Photo: Israel Police)

Police forces seized a computer and documents in a raid of the terrorist's home in the east Jerusalem neighborhood of Sur Baher, which were then passed on to the Israel Police's Central Unit.