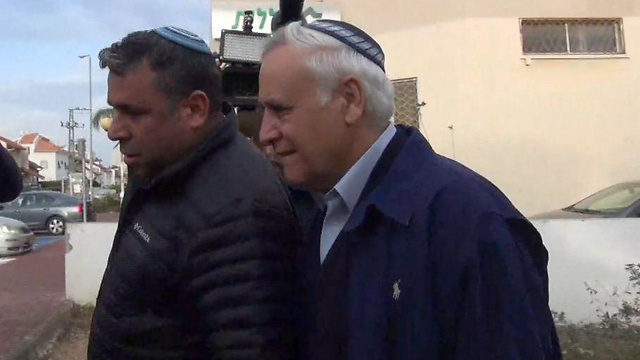 President Reuven Rivlin rejects request by convicted rapist and former Israeli president Moshe Katsav to rescind conditions imposed by the Israel Prison Service's parole board upon his release, including an evening curfew and a prohibition on international travel.

President Reuven Rivlin rejected a request on Sunday to cancel the terms of release for the convicted rapist and former Israeli president Moshe Katsav, who was released from prison last December.

In a statement on his decision, Rivlin said that the parole board approved Katsav's release based on the fact that it was subject to restrictive conditions and a complex rehabilitation plan that would be in place until the end of his parole in December 2018.

In an appeal filed by Katsav's lawyer, the former president requested to have his evening curfew cancelled in addition to a prohibition on international travel and attending Jewish study halls.

Despite Katsav's request that Rivlin take into account his age and good behavior with the Israel Prison Service, Rivlin declined to peel any restrictions from his terms, deeming them reasonable.

The parole board made a similar decision in April to reject requests by Katsav for the cancellation of release terms, noting that the proposed treatment plan was insufficient in relation to the victims of his crimes.

In a December 2016 decision, the parole board noted, "There is no doubt ... the prisoner underwent a change. The board also questioned Katsav about his actions and their consequences, and was "impressed by the honesty of his answers."

Katsav served five years of a seven-year sentence after being convicted of sexual assault against three former employees and obstruction of justice.