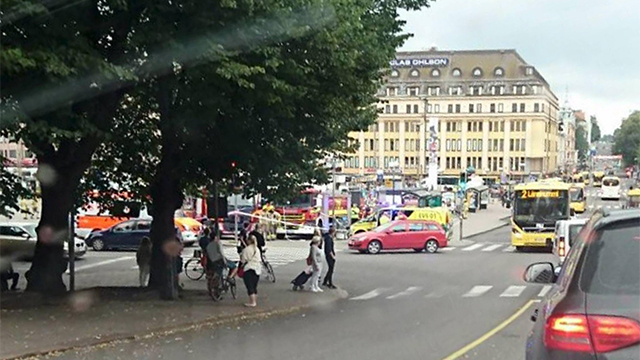 Police warn people to stay away from Turku, as security is reinforced in capital of Helsinki and in train stations; Police says suspect is in custody and being treated in a hospital after officers shot him in the thigh; attacker can be heard yelling 'Allahu Akbar' on footage of attack.

At least two people are dead and several people have been injured in a stabbing attack in the Finnish city of Turku on Friday, police said, warning people to stay away from the city.

The Turun Sanomat newspaper reported that police were inspecting departing trains and buses and reinforcing security in the capital of Helsinki, adding that a suspect is in custody and being treated in a hospital after officers shot him in the thigh.

People fleeing scene of the attack   (Video from Twitter)

Police in Finland said they have arrested one suspect and are looking for more potential suspects in the stabbing of several people in the western city of Turku. In a video of the attack, the stabber can be heard yelling "Allahu Akbar."

The site of the Finnish attack (Photo: AP)

Police made the announcement on Twitter, also warning people to leave and avoid central Turku.

Finnish broadcaster YLE said several people were seen lying on the ground in the central part of the city.

Tabloid Ilta-Sanomat says six people were injured, one man and five women, and that a woman with stroller was attacked by a man with a large knife.

One of the suspects is apprehended

Following the attack, Finland's interior minister said security is being stepped up across the Nordic country after stabbings that killed at least two people in a western city.

Minister Paula Risikko made the announcement during a news conference in Turku, where the stabbings happened.

"The government is closely following the events in Turku and the ongoing police operation. The government will meet later today," Prime Minister Juha Sipila wrote on his Twitter account.