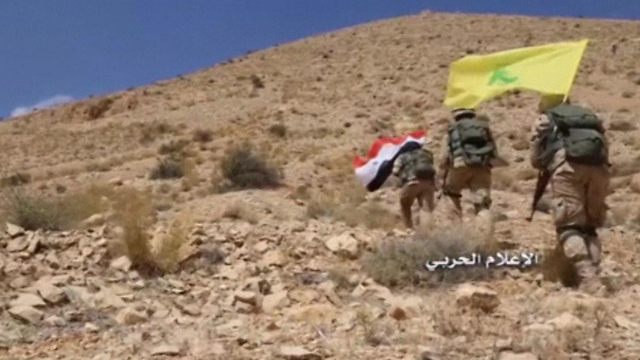 After fighting the Lebanese army on one front and Hezbollah and the Syrian army on the other while losing ground to both, ISIS submits to ceasefire in the Qalamoun region; truce meant to allow for negotiations over the fate of 9 Lebanese soldiers taken captive by ISIS.

BEIRUT - A ceasefire took effect on Sunday in an Islamic State pocket straddling the Syria-Lebanon border, where the jihadists have been fighting the Lebanese army on one front and Hezbollah with the Syrian army on the other.

The Lebanese army announced that a ceasefire in its own offensive took effect at 7am (4am GMT) but did not mention a ceasefire on Syria's side of the frontier.

Hezbollah and the Syrian army announced a ceasefire in their assault against Islamic State in Syria's western Qalamoun region, Hezbollah's al-Manar TV said.

The fighting began a week ago when the Lebanese army, and Hezbollah together with the Syrian army, launched separate but simultaneous offensives against the Islamic State enclave straddling the border.

Last week, Lebanon and Hezbollah each said they had made significant gains against Islamic State militants, driving them back into a smaller part of the arid hills on the border.

Hezbollah and Syrian fighters battling ISIS (Photo: Reuters)
Northeast Lebanon saw one of the worst spillovers of Syria's war into Lebanon in 2014, when Islamic State and other militants briefly overran the border town of Arsal. The fate of nine soldiers that Islamic State took captive then remains unknown.

Lebanon's army said Sunday's ceasefire took effect to allow for negotiations over the fate of the soldiers. Mediated talks have begun with the militants, a Lebanese security source said later.

Hezbollah and Syrian fighters battling ISIS (Photo: Reuters)
The presence of two other militant groups on the border ended earlier this month, when they withdrew to rebel territory in Syria after offensives by Hezbollah and the Syrian army.

The security source said on Sunday that Hezbollah members had entered an area in western Qalamoun to confirm that the remains of the Lebanese soldiers were buried there.

In a speech last week, Hezbollah leader Sayyed Hassan Nasrallah said the Iran-backed group had begun talks with Islamic State on a truce.

Lebanese army battling ISIS (Photo: Reuters)
He said that if the Lebanese state wanted to negotiate for Islamic State to evacuate its territory, the Syrian government would be ready to accept any formal request from Beirut.

Shi'ite Hezbollah is a close ally of Syrian President Bashar Assad's government and its forces fight alongside the Syrian army in major battles. Washington classifies Hezbollah as a terrorist group.

A Western diplomat praised the Lebanese army's performance in the border battle in "a risky and complex operation" that the diplomat said would have been "simply unimaginable" a decade ago.