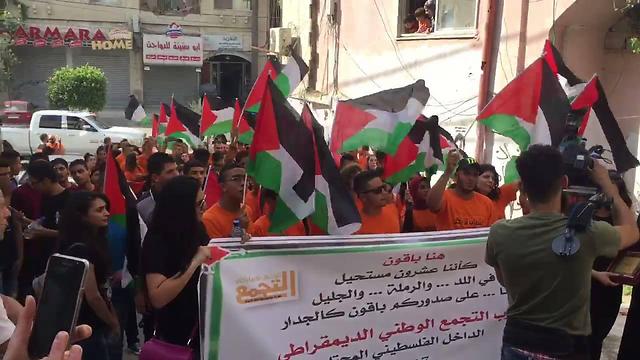 A summer camp for Arab-Israeli youths organized by the Arab-Israeli Balad party held its concluding ceremony this week in the Dheisheh refugee camp near Bethlehem, with campers marching alongside the camp's children in a procession honoring the "martyrs."

Draped in Palestinian flags, the children attending the camp marched through the refugee camp chanting invectives aimed at Israel.

As part of the summer camp's activities, children were divided into groups. One such group was named after former Palestinian Liberation Organization chief Yasser Arafat and another after Izz ad-Din al-Qassam, the eponym for the military arm of Hamas. Another group is named after Gamal Abdel Nasser, former President of Egypt who repeatedly spoke of Israel's annihilation.

Footage of the Balad march
X

Footage of the Balad march

"The Balad youth's 18th summer camp has concluded," wrote Joint List MK Haneen Zoabi on her Facebook page. "Balad is proud of its young men and women and hitching its activities and ideology to the spirit of struggle, vigor and force."

The party's youth organization also praised the event. "The content and activities passed on to the children are part of Balad's political platform," it said, "at the center of which is encouraging the Arab-Palestinian identity, democratic values and the 'state for all its citizens' concept."

Palestinian flags in Balad summer camp march
"As part of the summer camp," continued the statement, "which included a visit to the Dheisheh refugee camp, a procession took place whose goal was expressing solidarity with the camp's inhabitants and bereaved families who fell victim to the Nakba expulsion and the crimes of the occupation. This activity is completely legal and legitimate under the freedom of speech." Maor Tzemach, chairman of non-governmental organization 'Lach Yerushalayim' (To Thee Jerusalem), called on the police to investigate this incident. "Balad is manufacturing an intolerable reality among Arab society, one of an inciteful and provocative nationalism against Israel," he said. "Balad's anti-Israeli activities on all levels should be thoroughly investigated," Tzemach added, "and we need to retaliate immediately to any incitement it produces by closure of its institutions and halting their financing."