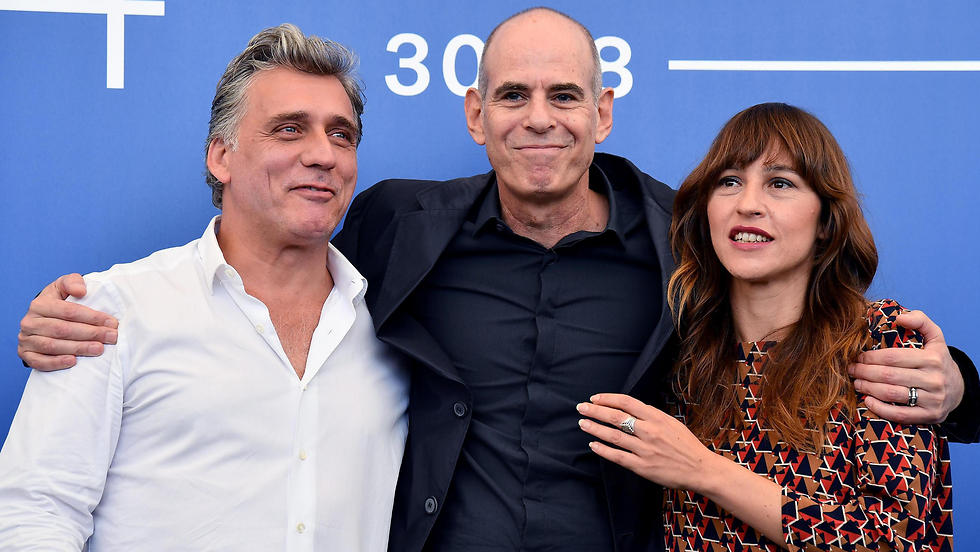 Samuel Maoz's second feature film opens with an affluent Tel Aviv couple being informed their soldier son has died in the line of duty and later explores the son's experience as one of four soldiers manning a desolate roadblock.

Then, his main feeling was shock. Eight years later he's back with only his second feature, Foxtrot, a critical hit that could win him his second Golden Lion.

"This time I hope to enjoy it," Maoz said.

Director Samuel Maoz, center, with Foxtrot stars Lior Ashkenazi, left, and Sarah Adler, right (Photo: EPA)
There's just one bad omen. His luggage went astray on the way to Venice, where Foxtrot had its red carpet premiere on Saturday. Maoz is philosophical about it. He is acutely aware how many things are beyond our control. Foxtrot is a potent parable about fate and peoples' powerlessness to direct their destinies.

The film opens with an affluent Tel Aviv couple (Lior Ashkenazi and Sarah Adler) being informed their soldier son has died in the line of duty.

Foxtrot (Photo: Giora Bejach)
The parents are floored by grief, and the film has more shocks in store for them as it explores the way trauma scars individuals and societies, and ripples across generations.

Maoz' 2009 Venice winner, Lebanon, was a claustrophobic portrait of an Israeli tank crew, inspired by the director's own experiences as a young soldier. Foxtrot also has its roots in a story from his life.

"When my eldest daughter went to school, she never woke up on time, and in order not to be late she would ask me to call for a taxi," Maoz told The Associated Press. "This habit cost us quite a bit of money, and seemed to me like a bad education, so one morning I got mad and told her to take the bus like everyone else. "Around 20 minutes, half an hour after she left, I heard on the radio that a terrorist blew himself up" on her bus route and that dozens of people were killed, he continued. Maoz said "there was one horrible hour" where he could not reach his daughter.

Foxtrot (Photo: Giora Bejach)
"After one hour, she returned home. She was late for the bus that exploded—she saw it leave the station and took the next bus." From that came the film's story of a father who unwittingly triggers a tragedy for his family. While Foxtrot has real-life roots, the director says he structured the film like a Greek tragedy, with three acts in which "the hero creates his own punishment and fights against anyone who tries to save him. And he is unaware of the outcome that his actions will bring about."

The film's middle section depicts the son's experience as one of four soldiers manning a desolate roadblock. It is a life of muddy tedium with the potential for sudden violence.

Foxtrot (Photo: Giora Bejach)
Again, the scenes feel grounded in Maoz's own military experiences, but he says the roadblock is more allegorical than real, a way of exploring conflict-scarred Israel "and the distorted perceptions that come out of terrible past trauma." At Venice, critics are calling the film a front-runner for the festival's Golden Lion prize. But the director expects criticism in his home country for his treatment of the army, the most revered of Israeli institutions. The film is bleakly comic in the way it depicts the bureaucratic and hypocritical aspects of the military and the brutalizing effect of decades of conflict on the country and its people.

Maoz said the army "is such an integral part of our state," because almost all young Israeli men and women must serve time.

Foxtrot (Photo: Giora Bejach)
"I could create a (story of) horrible crime in the Israeli police and nobody would say (anything)," he said. "But if you touch the army, this is very, very sensitive." Maoz's attitude to his homeland is expressed in a shot in a film. It features a laptop's screen showing a death notice for the young soldier, and beside it, a bowl of oranges. "I think that this is the story of my country—oranges and death notices," he said.