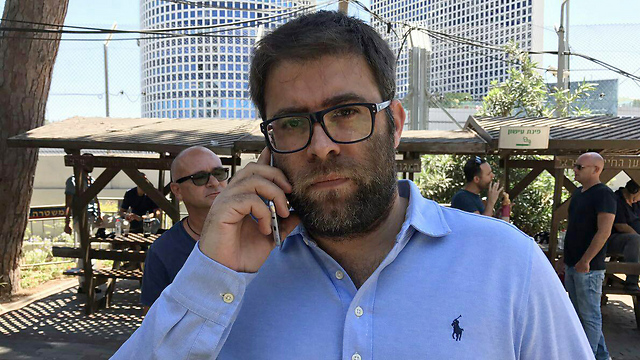 AG to indict MK Hazan for assault of a public servant

MK Oren Hazan (Photo: Motti Kimchi)
The decision to indict Hazan was done in accordance with the recommendation of State Attorney Shai Nitzan and after Hazan's claims were rejected following a disciplinary hearing. MK Hazan now has 30 days to ask the Knesset to grant him immunity from criminal charges. The incident in question occurred in September 2014, when the bank account of Aviva Hazan, the MK's mother, was frozen after the mortgage on the family business "Baba Grill" went into foreclosure. When Hazan learned of the foreclosure, he arrived upset at the Ariel municipality offices, where he waited for municipality director-general Avi Ezer to arrive. According to the indictment, when Ezer arrived accompanied by Ariel Mayor Eli Shaviro, Hazan started yelling at the director-general. Ezer told Hazan, "Not now," but Hazan continued yelling and even began swearing at Ezer, saying "You thieving son of a b****, I will kick you out of here." Hazan also forcefully pushed Ezer back against a railing. He then followed the director-general into a conference room, closed the door behind him and told Ezer: "No one is leaving here." Inside the conference room, Hazan continued yelling and swearing at Ezer, until he was removed from the room by Gal Oz, the head of the tender committee, who was in the room at the time. After being removed from the room, Hazan burst into the mayor's office, where he yelled and swore at the mayor as well. The mayor ordered Hazan to leave his office, but Hazan refused and threatened to "deal" with the mayor and make sure he "won't stay in this office."

In response to the decision to indict Hazan, Ariel Mayor Shaviro said, "We will accept any decision made by law enforcement authorities."

Hazan's lawyers, Zion Amir and Efraim Demri, said: "We received the AG's decision with regret and disappointment. The case was about to be shelved and was left forgotten for a long time. It was only after MK Hazan was elected to the Knesset that the case was revived."

Gilad Morag contributed to this story.