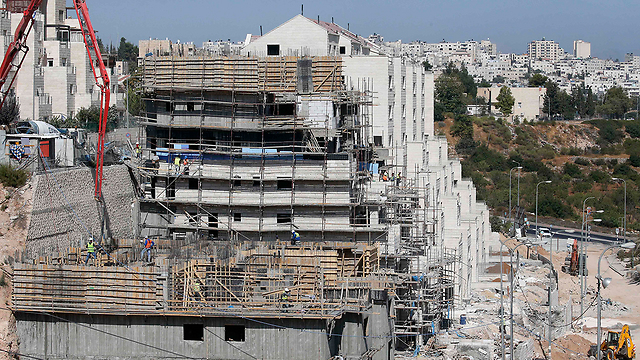 Op-ed: Priding itself on being a serious research institute, Molad continues to produce studies based on so-called facts and drawing predetermined conclusions. Its recent study about settlements being a security burden on Israeli ignores all high-ranking security officials saying exact opposite.

Molad deems itself a research institute, and as such publishes papers with data and claims that are supposed to be organized and to make sense. This time the institute claimed it has been able to prove the settlements are a burden on the IDF and do nothing to promote Israeli security.

Construction in Kiryat Arba (Photo: AFP)
This is a serious allegation, since—as we well know—the only Israeli consensus is on security, and that's not something to trifle with. Their research method, such as it is, was to interview former high ranking officials in the Israeli security establishment. We'll circle back to that, but before we do I want to point out I'm pleased the Molad institute is creating this debate. At any given moment, strategy and ideology are much better debate items than the prime minister's son not picking up his dog's poop—something Molad weighed in on just a few weeks ago—or the character of some minister or other. To Molad's credit, it's still able to stir up some media noise. It takes pseudo-data, manufactures videos and papers, puts a headline and abstract on it and it spreads like wildfire. Once it was claims regarding minister Uri Ariel, then Likud donors, Ayelet Shaked, religionization within the education system and now it's the settlements' turn. Claims made in Molad's research work will always go left to right. The result will be preordained from the moment the first letter is written.

That's important to note for the sake of the argument, which is indeed nevertheless healthy and desirable.

Yigal Alon, the left-leaning ideological father of the settlements (Photo: Fritz Cohen, GPO)
Back to the research at hand, though. The Molad institute interviewed some former security chiefs. Some of them were "objective", in which case interpretation of what they said came in and became the headline instead, and some were "biased", and they wouldn't have been inserted into such a "serious" study to begin with. First and foremost among the biased camp, is former Chief of Staff Moshe Ya'alon, who considers settlements in Judea and Samaria a necessity, as he said two weeks ago. Others in that camp are major-generals such as Gershon Hacohen and Yaakov Amidror and even Shin Bet directors like Avi Dichter or Yoram Cohen. This is only a partial list. These people, who don't exactly see eye to eye with the claims made by this so-called "study", weren't interviewed or asked anything. I only mention that fact because the system here has something to teach us about past results. Molad are highly adept at public relations, and highly inept at data and academic seriousness.

Having said that, it's time to tackle this one-sided claim against the settlements. Unlike the view seen from tactically considering a lone settlement or illegal stronghold somewhere in Samaria or Binyamin, the settlement undertaking is part of a much wider worldview which has roots in the days of Yigal Alon and Mapai after the Six Day War.

Israeli flags over Beit El (Photo: AP)
During Israel's younger days—the country was only 19 at the time—experience showed the border line passes where the plowing line does, which is why settling the Jordan Rift Valley was considered to be of paramount importance. The people who settled there, affiliated with the leftist parties, knew they were demarcating the country's eastern border. The people of Gush Emunim, who settled in the mountain region—Binyamin, Gush Etzion and western Samaria—also considered it an ideological, not just a topographical line. Fifty years later, reality in Judea and Samaria hasn't changed much. The division already in place between A and B territories in Palestinian hands and C in Israel's is a late translation of Alon's original plan with only minor changes. After ideology, a strategic sense remains. Israel's eastern border is a blockage for both us and the Jordanian, guarding against a Palestinian country linking to Jordan. Our interests, in this instance, converge. The tops of mountains containing large settlements allow control over the center of the land, most of which is Palestinian. Other settlements necessitated far-reaching infrastructures and a military deployment allowing Israel to deal with waves of violence. The main lesson of the al-Aqsa intifada—which effectively neutralized the problematic parts of the Oslo accords—is that separation from the Palestinians is mostly political rather than security-centric. For the settlements or against them, without the IDF's ability to go into Palestinian cities when it needs to Mahmoud Abbas won't be able to survive and terrorists will come into Israel. This isn't Amona we're dealing with, despite how attractive it is to pretend we are, but the future of the Hashemite Kingdom itself, Palestinians' ability to self-govern and utopia faced with strategic reality. Should the "research" not have broached these questions as well?