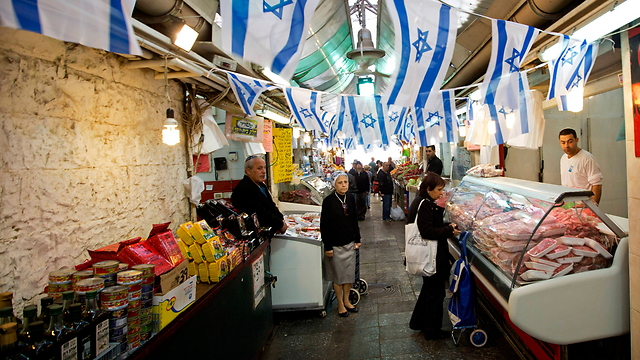 A young settler is indicted after asking Arab man 'why are you going out with a Jew,' before attacking him; defendant claims he was the one who was attacked.

Yehiel Weisenstern, 18, was charged Sunday with aggravated assault and committing a racially motivated hate crime, after attacking an Arab he suspected was dating a Jewish woman.

Weisenstern, a resident of the West Bank settlement of Modi’in Ilit, allegedly beat the victim with his fists, allegedly knocked the Arab man to the ground and kicked him until a passerby stopped him.

Weisenstern's lawyer stated his client claims he was the one who was attacked.

Last Monday, the injured party, whose first name is Mohammad, walked on Agripas Street near the Mahane Yehuda market area in downtown Jerusalem, along with a woman who works with him at one of the market's shops.

The two then ran into Weisenstern and two other men. Weisenstern reportedly asked Mohammad for a cigarette, to which he replied that he had none. The three men followed Mohammad and the woman as they went on their way. They then asked her if she was Jewish and asked Mohammad why he was dating Jewish girls.

Muhammad responded that they were only co-workers, at which point either the suspect or one of the other men allegedly took out a knife from his pocket and told him: "You’re dating Jewish girls. We're going to f*** you up today!"

At this point, one of the three men suspected of the attack then "punched the plaintiff twice in his shoulder." According to the indictment, the plaintiff began to walk away but Weisenstern and the men others followed, who cursed him and told him that he wouldn’t be allowed to work in the market anymore, and that they would screw him." The three then surrounded Mohammad and began beating him until he fell to the ground, at which point they began to kick him. A passerby who noticed the incident stopped the violence. Mohammad suffered multiple wounds to his head and across his body.

Attorney Idan Gamlieli of the Public Defender's Office, who represents the defendant, said in response to the charges that "the young man has cooperated with the investigators and given a detailed version of the events. He asserts that he was attacked by the plaintiff, that he did not start the incident nor not act out of nationalistic or racist motives. We are waiting to receive the investigative material and after we study it, we will respond in court."