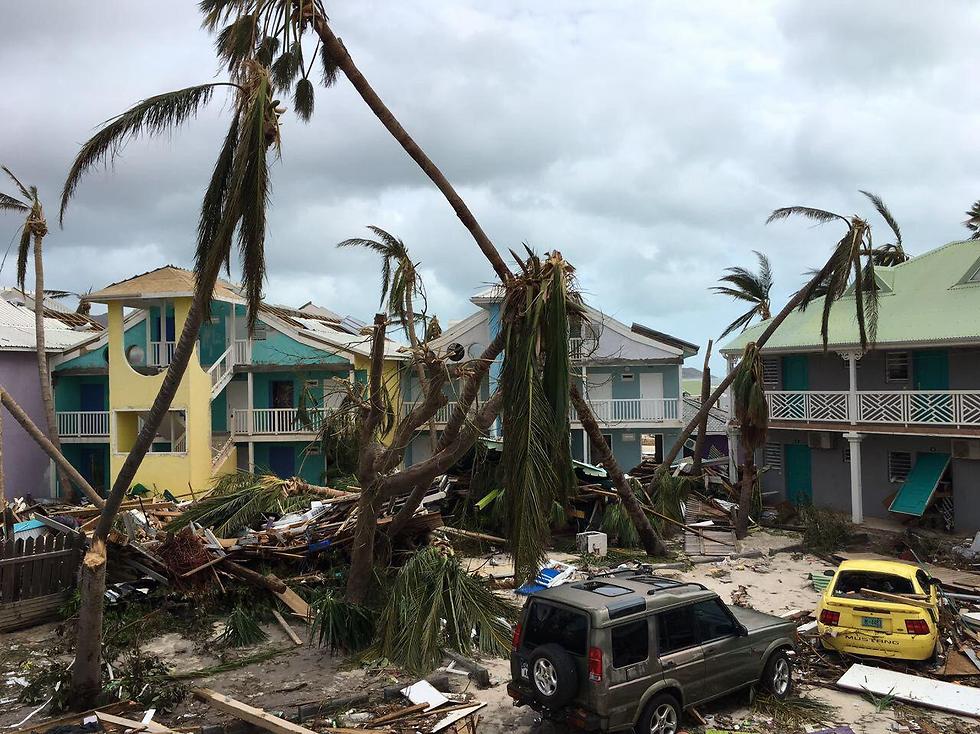 'Every patient or resident that sees us says "Thank you Israel, you Israelis got here first." It's a great honor,' says Fernand Cohen-Tannoudji, the head of the delegation from Israeli organization Rescuers Without Borders to the island of Saint Martin.

When Hurricane Irma hit the Caribbean, it claimed many lives and caused a lot of damage on the island of Saint Martin, where a delegation from the Israeli organization Rescuers Without Borders (SSF) is working to save lives and provide assistance. "Crazy bedlam, complete chaos, gunfire on the streets, insane vandalism, a lot of injuries, and doctors are talking about over a thousand fatalities," Fernand Cohen-Tannoudji, a resident of Raanana and am SSF volunteer, described the situation on the island.
Destruction in Saint Martin following Hurricane Irma    (רויטרס)
X

Arie Levy, a resident of Har Shmu'el and founder of SSF, could not remain indifferent to Saint Martin's plight and called upon the volunteers of the organization to help.

Damage in Saint Martin (Photo: SSF)
"We used this concept of 'Hatzalah Judea and Samaria,' which has existed in Israel since 2000, in many other countries in the world in order to provide a quick initial assistance after disasters," said Levy, whose organization numbers 700 volunteers working in full cooperation with Magen David Adom (MDA).

Water brought by Rescuers Without Borders to Saint Martin (Photo: SSF)
"We trained, instructed and provided medical equipment to groups of volunteers in 14 countries, precisely for events of this nature. The significant advantage in having volunteers close to disaster areas is that they arrive within mere hours and provide immediate, initial help, instead of waiting for delegations coming from afar," he explained.

Cohen-Tannoudji, who was appointed the head of the delegation to Saint Martin, arrived there on Friday. "The volunteers were already waiting for me here with the equipment and everything else we needed. I organized the group. Right now we have seven volunteers from the organization on the island and tomorrow we're supposed to be joined by 15 more," he said.

The volunteers are joined by two French-speaking Jewish psychologists. "Most of the volunteers are locals, but they all present themselves as volunteers of the Israeli organization," Cohen-Tannoudji said. "Every patient or resident that sees us says 'Thank you Israel, you Israelis got here first.' It's a great honor."

Rescuers Without Borders volunteers (Photo: SSF)
Cohen-Tannoudji said the local hospital was destroyed almost entirely by the hurricane, with only the ER surviving. "The injured tell us there is a stench of dead bodies in the air," he recounted.

He added the Red Cross was having a hard time sending its people to the island and was even aided by the Israeli organization to transport equipment to Saint Martin.

Damage in Saint Martin (Photo: SSF)
"The doctors are talking about at least 1,000 dead under the wreckage," Cohen-Tannoudji continued. "I spoke to Dr. Jacky, the head of the ER at the hospital, and he told me half of the dead are still under the wreckage."

Damage in Saint Martin (Photo: SSF)
According to Cohen-Tannoudji, there are areas of the island rescue forces have yet to reach. "These are places that were flooded. Now that the water level is going down, more and more bodies are being uncovered," he said.

Damage in Saint Martin (Photo: SSF)
France and the Netherland split control over the island, with the Israeli delegation providing assistance only to the French side as access to the Dutch side has been blocked by the storm. "There's insane vandalism here. Since Thursday, police have been telling people to arm and defend themselves. Many of the residents stole all of the weapons from the local police. The mayor fled the city on Friday. There are areas you can't enter, not even the police have been there," Cohen-Tannoudji explained.