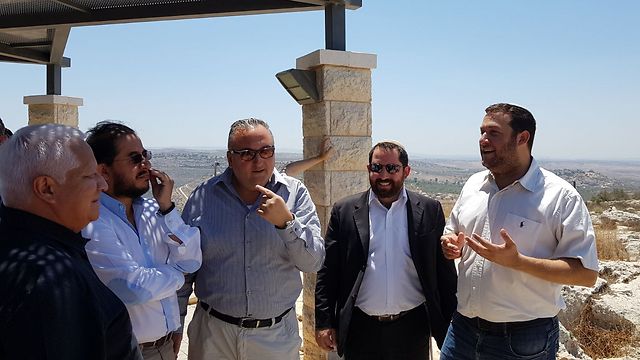 Lobby for Judea and Samaria in Mexican parliament announced following visit of Mexican Social Encounter Party chairman to region; Dr. Hugo Eric Flores: 'demand of Israel to give up Samaria would lead to suicide.'

On the heels of Prime Minister Benjamin Netanyahu's trip to Latin America this week, a new lobby for Judea and Samaria was established in the Mexican parliament.

The lobby was founded after the chairman of the country's Social Encounter Party (PES), Dr. Hugo Eric Flores, visited the Samaria region about a month ago, and met with the head of the Samaria Regional Council, Yossi Dagan, and President of Parliament for Israel and Vice President of the Mexico-Israel Chamber of Commerce, Yossi Eldar.

The lobby is intended to act to strengthen Mexico's ties with Israeli industrial zones in the West Bank—serving as response to the movement calling for Israel's boycott and delegitimization—and to influence future Mexican votes cast in the United Nations in decisions relating to Israel, as Mexico is considered to be pro-Palestinian.

Samaria Regional Council Chief Yossi Dagan (R) and PES party Chairman Dr. Hugo Eric Flores to his right (Photo: Roee Hadi)
"These are yet more fine tidings for Jewish settlement, as well as a testament to the Samaria Regional Council's global efforts to combat BDS. Latin America's importance cannot be dismissed, and today it joins the enlightened people fighting anti-Semitism and delegitimization, aimed at Israel in general and Judea and Samaria in particular," said Dagan. Following the move initiated by the PES party, 120 parliamentarians from Latin American countries signed a document professing cooperation with the Parliament for Israel organization, which was behind the creation of the Judea and Samaria lobby. "After visiting the country's 'balcony' along with Mr. Dagan, I was able to see with my own two eyes the distance between Tel Aviv and Samaria and Israel's short width, I was able to comprehend in the realest possible way just how much the demand made of Israel to give up this region would lead to suicide," said PES party Chairman Dr. Flores. "Latin America has become the back yard of Israeli hasbara (public relations). The hundreds of millions living in that region cannot be ignored, and simple hasbara activities may yet turn the tide in favor of Israel and Judea and Samaria in international discourse," said Eldar.