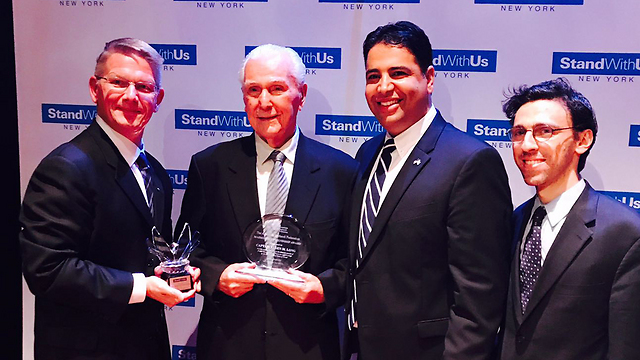 Last surviving pilot of Operation On Wings of Eagles honored

Captain Elgen M. Long, 91, is the last surviving crew member of Alaska Airlines who took part in the 1948-1950 campaign to secretly airlift some 47,000 Yemenite Jews to Israel to save the from rising anti-Semitic violence; last week, an event was held in his honor in New York.

An event was held last week in honor of Captain (ret.) Elgen M. Long, 91, the last surviving crew member of Alaska Airlines who participated in an operation to smuggle some 47,000 Yemenite Jews—as well as 3,000 from several other countries—to Israel between 1948-1950 to save them from rising anti-Semitic violence.

The event was held in New York by the pro-Israel education and advocacy NGO StandWithUs. Alaska Airlines was also awarded for the risks that her pilots took in Operation On Wings of Eagles, also known as Operation Magic Carpet. "When we landed at the airport in Tel Aviv, a young officer approached us and told me and my staff that we had done the right thing," Captain Long said. "We are all proud of the historic role we played in the realization of the prophecy of the return of Jews to Zion."

L to R: American Sephardic Federation representative Jason Guberman, StandWithUs Executive Director Shahar Azani, Captain Elgen M. Long and Alaska Airlines representative Tim Thompson (Photo: StandWithUs)
The CEO of Alaska Airlines agreed to a request by the Israeli government to secretly airlift the Jews of Yemen to Israel, despite objections from the company's board of directors.

The brave Alaska Airline crew members risked their lives to bring Jews to safety, despite not being Jewish themselves.

In one case, an Alaska Airlines pilot was forced to land in Cairo for emergency refueling. He knew the Egyptian authorities must not learn of the Jewish refugees he had on board, and so he had to improvise. The pilot told the airport's control tower he had a plane full of people sufferin from chickenpox and urgently asked for ambulances. Instead, the control tower sent him a refueling truck, so he could refuel and leave as quickly as possible.

The event was organized by StandWithUs Executive Director Shahar Azani, whose family immigrated to Israel in the operation, and was sponsored by Alaska Airlines and the American Sephardic Federation.

"It is an honor for us to stand with a hero like Captain Long, who saved the lives of many Yemenite Jews. Thanks to him and his friends, we saw the prosperity of the community and of the state," Azani praised. Minister of Science and Technology Ofir Akunis, representing the Israeli government, thanked Captain Long for his heroism and for taking part in the operation. He also emphasized the right of the Jewish people to its land and the unbreakable connection between the two, as reflected in the return of the Yemenite Jews home after their long exile.