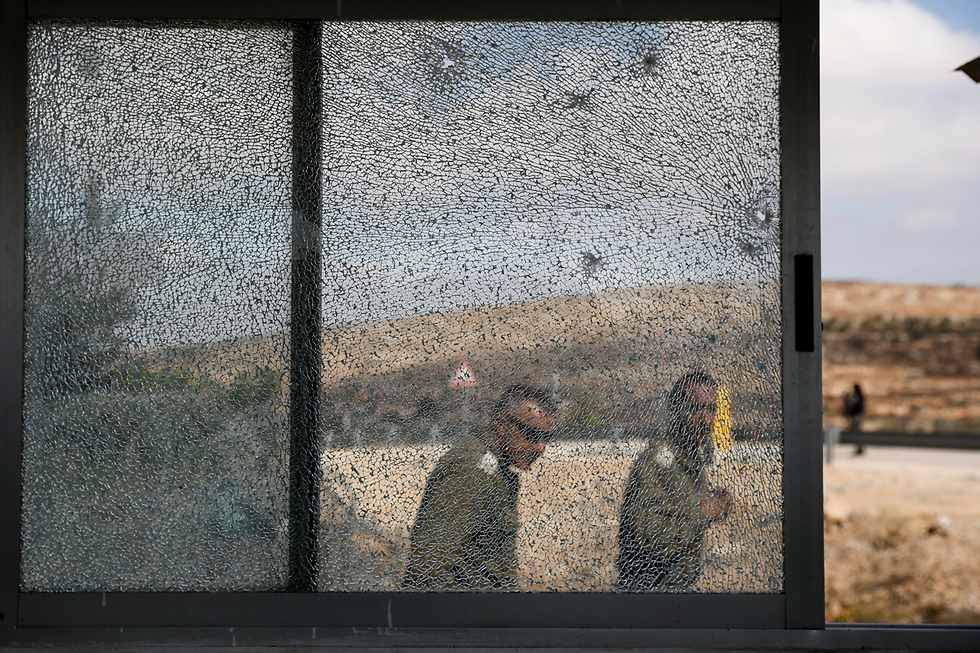 Residents of the settlement near which three Israeli guards were killed by Palestinian terrorist concerned about Arab laborers entering; ‘The terrorist always said hello. This makes you think. It hurts so much when it's someone you know,' says one resident.

After the terror attack Tuesday that claimed the lives of three security personnel near the Har Adar settlement's back gate, residents have raised concerns over fragile coexistence between the Jews living there and the Arab laborers and neighbors.

"We've been living in harmony with the region's residents and those living beyond the fence, especially Abu Ghosh. This is a difficult day. Everyone is choked up and feeling uneasy," said Guy Shem Tov, a resident who has been living in Har Adar for the past 30 years.

Scenes of the Har Adar attack (Photo: EPA)
Shem Tov employs a laborer from one of the neighboring villages once a week but admits that the deadly attack has heightened his fears. "You don't want to think about anything like that happening, but it can happen to anyone, anywhere," he said.

Dganit, who's been living in the settlement not far from Jerusalem for 27 years, also said the attack cracked the ties of mutual trust that had prevailed in the otherwise peaceful community.

"We've been living with the different laborers and council employees and know all their names. Every day I see them on the street and chat with them. When something like this happens, it makes you think," she said.

Dganit added that the feeling in Har Adar was that terrorist Nimer Jamal, from nearby Beit Surik, carried out the attack due to family, rather than ideological, reasons.

"We know the attack most likely stemmed from his own personal issues, which he decided to solve in that fashion and become some kind of 'super martyr'. Unfortunately, the Palestinian Authority has also made sure it funds this sort of thing," she added.

Nevertheless, Dganit insisted that the actions of one man could not ruin the relations between Arab neigbors and the Har Adar residents. "I don't think I'll start fearing the laborers working here or cast them all in a negative light. I think this was a one-time thing and part of this place's essence is coexistence," she concluded.

(Photo: AP)
The feelings of unease run even deeper among those who actually knew the terrorist. Weatherwoman Sharon Wexler is one such person, having employed him as a cleaner in her own home. "He seemed like a really nice man," she said. "Up until this morning there was a really nice feeling of living side by side with our neighbors, a feeling of coexistence," Wexler claimed. Another Har Adar resident, Henya, said she also personally knew the terrorist who killed Youssef Ottman, Or Arish and Solomon Gavriya. "I remember a likeable man who walked around never forgetting to say hello to anyone. It hurts so much precisely because it was someone you know," she said.

"Har Adar has existed for 30 years, with coexistence being its daily reality. Day in and day out hundreds of laborers walk through our gates, who build, work and provide other services for us. We provide their livelihoods," said Har Adar council chief Chen Filipovich.

The three victims. Arish was a Har Adar resident
When asked whether that coexistence will persist after the attack, Filipovich said, "Routine is part of coexistence and we'll do everything to get both back. We'll handle anyone seeking to do us harm and embrace anyone who wishes to cooperate." Following the attack, Palestinian laborers have been barred from entering Har Adar Wednesday. No other West Bank settlement will be closed to entry.

Despite the residents' desire to avoid an escalation of tensions and their willingness to restor normality, the laborers themselves have expressed anguish at what they describe as unfair treatement.

"Sometimes the soldiers demean us and treat us as less than human. The status quo makes a lot of young people angry, and gets them thinking about attacks. How much can we take? It's a powder keg that will eventually explode," bemoaned Aamer of Tulkarm.

Mahmud of Nablus by contrast, who also works in Israel, maintained that economic considerations must take precedence. "It's true we're all suffering hardships, but we need to fight to feed our families. This isn't the time for attacks because such deeds only bring everything down and make our lives harder," he said.

COGAT's Arabic Facebook post chastising Munir al-Jaghoub
Coordinator of Government Activities in the Territories Maj.-Gen. Yoav (Poli) Mordechai spoke about the inciting comments made by the head of Fatah's Information Department Munir al-Jaghoub on the Coordinator of Government Activities in the Territories' Arabic Facebook page. "(Jaghoub) pours gasoline on the flames of violence, which will only bring disaster upon his people. Jaghoub, head of the Information Department in Fatah's Office of Mobilization and Organization, never missed an opportunity to drizzle more and more gasoline on any flame he came across. Munir should study history books for a bit, and discover playing with violence will only lead to misery for the Palestinian public and the loss of sovereignty to Hamas," the Facebook page cautioned.