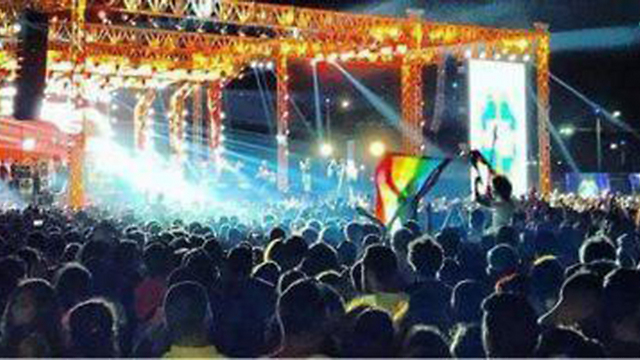 Egypt has arrested 22 people in the past three days as part of a crackdown on gays after a rainbow flag was raised at a concert, activists and rights groups said on Monday.

At least 33 people have been arrested since Sept. 23, a day after a group of people were seen raising the flag, a rare public show of support for lesbian, gay, bisexual and transgender rights in the conservative Muslim country.

The public prosecutor announced an investigation after local media launched a highly critical campaign against those who raised the rainbow flag at a Mashrou’ Leila concert, a popular Lebanese alternative rock band whose lead singer is openly gay.

Footage of the flag being raised at the concert

On Monday police arrested Ahmed Alaa and Sarah Hegazy, the latter being the first woman involved in such an incident in years, in relation to the case, their lawyer said.

They were both charged with "joining a group formed in contrary to the law" and "propagating that group’s idea". Hegazy faced a further charge of "promoting sexual deviancy and debauchery" and the Supreme State Security Prosecution ordered them detained for 15 days, lawyer Amr Mohamed told Reuters. Two men had been arrested earlier in relation to the flag incident but one was released. The remaining arrests were unrelated to the incident but have all been over the perceived sexual orientation of the defendants and came after it. At least 10 men were arrested between Sept. 28 – 30 and six others earlier that week, judicial sources said. All 16 went on trial on Sunday charged with "promoting sexual deviancy" and "debauchery," euphemisms for homosexuality. A verdict is due on Oct. 29. One man has been sentenced to six years in jail over similar charges.